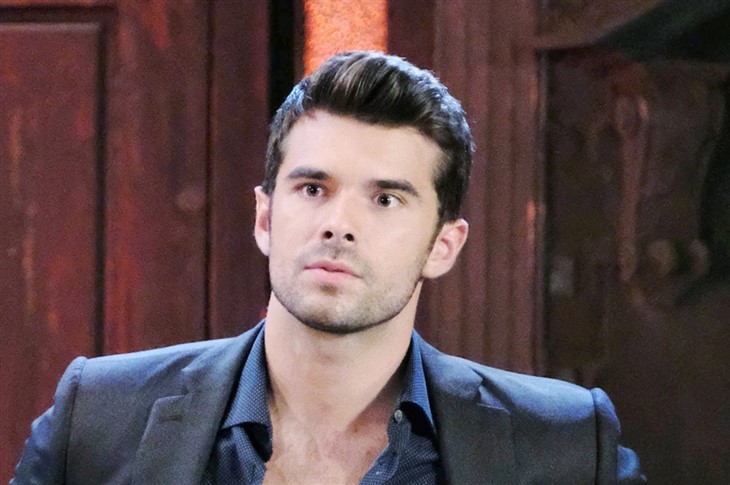 Chase was just told by Dante Falconeri (Dominic Zamprogna) that Brook Lynn Quartermaine (Amanda Setton) was supposed to write the civilian review board a letter of recommendation. Chase would drop the hot singing career Brook Lynn’s trying to promote in a heartbeat if only he could get reinstated as a detective at the PCPD. That letter would go a long way towards that goal, but when Dante mentioned it Chase knew nothing about it.

Now Chase buttonholes Brook Lynn about the letter, asking her if there’s anything that’s happened that she hasn’t filled him in on. He’s probably asking about her long conversation with Linc Brown (Dan Buran) at the bar too, but his main concern is that letter and why she never wrote it.

Meanwhile, Sam McCall (Kelly Monaco) confesses her concern to Dante, asking what happens if “he doesn’t deserve it?” which could be a concern about Cody Bell (Josh Kelly). It is highly doubtful they’re talking about Chase and the letter to the civilian review board, since Sam’s not involved in that. But Cody is someone and something they have concerns about in common, and Sam knows now he is Leopold Taub’s (Chip Lucia) son-so he says. Dante will soon hear about the theft of the Ice Princess necklace he was interested in and it’s theft. But for right now they’re just concerned about Cody.

At the Quartermaine mansion, someone’s late to dinner, or maybe he’s the dinner and he’s late for it. Olivia Quartermaine (Lisa LoCicero) tells Ned Quartermaine (Wally Kurth) they’re waiting on the “man of the hour”. The GH weekly preview shows a wild turkey swooping in after what appears to be a bag of birdseed Leo Quartermaine (Easton Rocket Sweda) left on a table.

Elsewhere, Sonny Corinthos (Maurice Benard) reassures Nina Reeves (Cynthia Watros) he’s thankful for her as he asks if she wants to make some new traditions with him. Nina looks pleased even though there’s not much family for her to celebrate with, since Aunt Liesl Obrecht (Kathleen Gati) is comforting Britt Westbourne (Kelly Thiebaud). More than one family member has a dire diagnosis although Nina doesn’t know it yet. Sonny and Nina will make the best of the holiday together this year.

Elsewhere in the Quartermaine mansion, Drew Cain (Cameron Mathison) and Carly Spencer (Laura Wright) are still daytime friends and night time lovers, hoping no one else discovers. So far only Josslyn Jacks (Eden McCoy) knows for sure they’re dating, although nosy Nina certainly suspects and Olivia knows, although she’s keeping it to herself. They’re still trying to be careful since Ned had previously mentioned the dreaded words “insider trading” to Drew.

It looks like Drew and Carly are plotting a little smooching there in the Quartermaine mansion on the sneak. She says she’s game if he is, and he’s bound to be game.

At the Port Charles Police Department, Mayor Laura Collins gives a warning of sorts as Felicia Scorpio (Kristina Wagner) stands by her for support. Laura was lucky that Kevin Collins (Jon Lindstrom) called and Holly Sutton (Emma Samms) dropped her off as she fled with her car and the stolen Ice Princess necklace. Laura told Kevin to pick her up but also to notify PCPD Commissioner Jordan Ashford (Tanisha Harper) that Holly was armed and dangerous. However, she warns Jordan, and Mac and Robert Scorpio (John J. York, Tristan Rogers) to make sure this ends peacefully.

Jordan’s been interrupted in her pursuit of Holly when Alexis shows up demanding a payment of sort. Alexis was promised exclusive interviews by Jordan on police cases, in particular on “The Hook”. She reminds Jordan that she had promised, but she hasn’t delivered.

There’s not been anything to deliver, so perhaps Alexis thinks all the hubbub at the PCPD is about The Hook. In reality, it’s about Holly Sutton and her theft of the Ice Princess necklace.