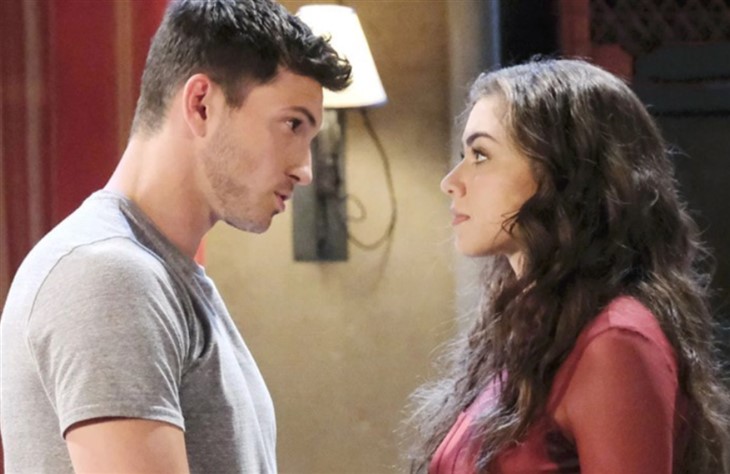 Days of Our Lives (DOOL) spoilers for July 5, 2022, reveal Ben and Ciara ready to do something everyone watching expected, but nothing their fellow Salemits expected.

Days Of Our Lives Spoilers – Ready To Sail, But First Things First

After thinking it over long and hard, Ben Weston (Robert Scott Wilson) and Ciara Brady Weston (Victoria Konefal) gather their friends and family around them to tell them they are going to do a Bo (Peter Reckell) and Hope (Kristian Alfonso) and sail off into the sunset for a trip around the world with their baby boy named Bo.

But first, they want to christen their son and Ben asks Marlena Evans (Deidre Hall) to be his godmother. Considering she was possessed and helped them conceive, this is a little weird, but maybe they don’t realize what MarDevil had to do with that yet. At least Marlena is honored and is happy to be Little Bo’s godmother. Now, onto a christening before they leave.

Speaking of devil possession and babies, fans now know that when MarDevil morphed Jan Spears (Heather Lindell) into Belle Black Brady (Martha Madison), Jan didn’t conceive the night he tricked Shawn Brady (Brandon Beemer) into sleeping with her. No, she apparently had some fun in Statesville with Evan Frears (Brock Kelly), a man who seems to be quite fertile and who likes caring for his own kids.

Now, Evan’s dad, Orpheus (George Del Hoyo) knows the whole truth and told Evan, who hates the idea of another man raising his child so both Orpheus and Evan set a plan in motion to fix this mess as soon as possible, but that requires getting a hold of Shawn and completely ruining Jan’s life and plans.

When Shawn gets a mysterious phone call, he can’t imagine what it could possibly be about so he starts to investigate. That looks like what Orpheus and Evan want him to do, but why can’t they just come right out and tell him about Jan’s little trick. That would probably be the easiest thing to do, but this is a soap after all and we need to see Shawn figure out the horrible truth on his own. Stay tuned to Days of Our Lives weekdays to see who those suspects end up turning out to be.