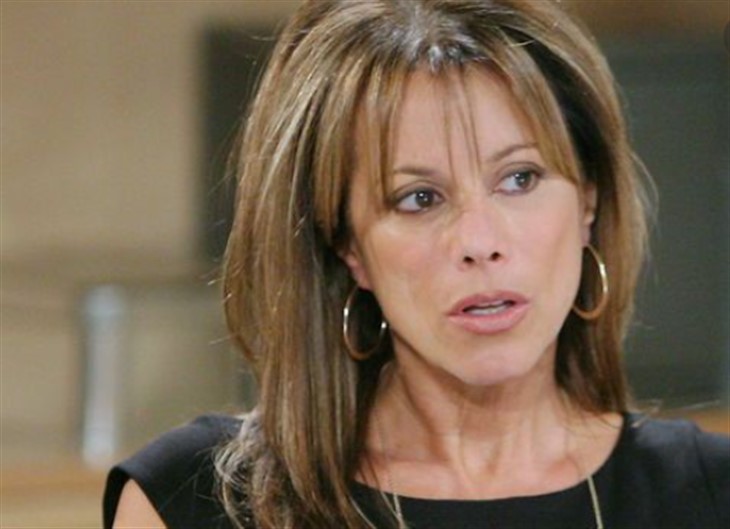 General Hospital viewers will remember that Olivia already knows that Alexis spent a drunken night with Ned Quartermaine (Wally Kurth) and that she stabbed a syringe loaded with lidocaine into Dante Falconeri (Dominic Zamprogna). The one night stand happened when both Ned and Alexis were drunk, and Brook Lynn Quartermaine (then Briana Lane) was mad at her dad. Olivia was still in Europe with Robert Scorpio (Tristan Rogers) trying to hunt down Holly Scorpio, (Emma Samms) who was presumed dead but they didn’t have confirmation.

Her son Ethan Lovett (Nathan Parsons) had joined them, and they were actually on the right track but then were convinced Holly had been killed at the casino they had tracked her to. In reality, she is still in captivity although in a nice place. But Ned thought Olivia had run away with Robert and it was romantic, so he was devastated and got drunk with Alexis, and what happened, happened!

General Hospital spoilers show Olivia is giving no excuses to either one of them, because, after all, drunk or not, it takes two to tangle! Dante just got in the way when Alexis was rushing towards Franco Baldwin (Roger Howarth) trying to protect Sam McCall (Kelly Monaco) who actually didn’t need protecting. But, again, Alexis was drunk! Olivia isn’t really after a confessional from Alexis – she is out for revenge and wants Alexis to pay in the most severe and public way possible!

Olivia confronts Alexis in a manner that displays her dirty laundry for everyone to see – everyone who is in the Port Charles Police department, that is! Alexis has been taken in over the syringe incident, and Olivia wants to make sure that Mac Scorpio, (John J. York) who was questioning her, gets the whole story! In front of Mac and whoever else might be there – including Alexis’ attorney, Martin Grey (Michael E. Knight) she tears into Alexis, no holds barred!

According to General Hospital spoilers, Olivia is so angry that Mac has to hold her back from strangling Alexis, and Martin is simply appalled! But as a result, Mac has to take into account the testimony, however angry, from Olivia and once she calms down a little bit, takes her into the office and talks to her about what she knows.

Martin was not sure about his being able to come up with any defense for Alexis to begin with, except due to mitigating circumstances, hoping to gain the jury’s sympathy in the courtroom. But now he is concerned that even that won’t work, because the jury may see it that Olivia has even more reason to grieve, and they may feel much more sympathy for her than for Alexis! After all, it is her son who nearly died after being stabbed by Alexis, and this is on top of Dante’s father being presumed dead! Alexis has a child with Sonny Corinthos (Maurice Benard) as well but shows no grief over him at all!