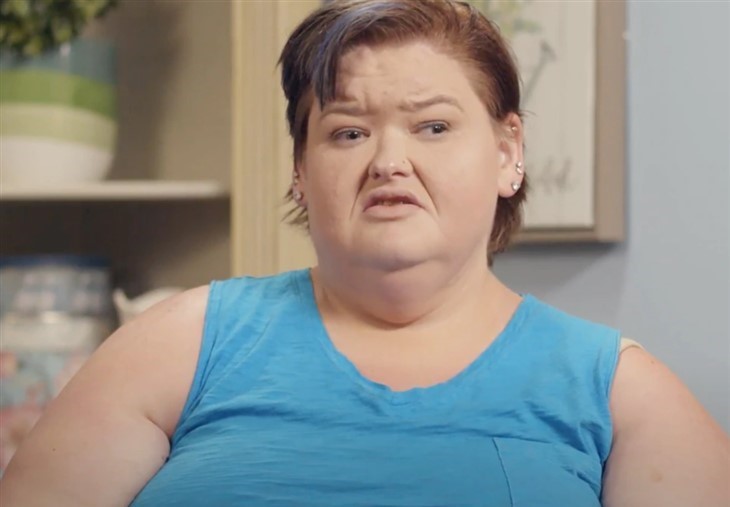 Amy Slaton of 1000 Lb. Sisters has disappointed her doctor who says she hasn’t “put any effort back into her health” and that she is “stalled out at this point.”

When 1000 Lb. Sisters began, Amy, 34, had two chief goals in mind, one dependent on the other: first she wanted to lose enough weight that she could qualify for weight loss surgery so that she could, in turn, achieve her other goal, to have a child. She was able to achieve both goals.

Somewhere along the way she “stalled.” Continue reading and we’ll discuss what may have happened.

1000 Lb. Sisters – Amy Slaton’s Nervous Because She Hasn’t Be Weighing Herself

“When I first met Amy, over two years ago, she weighed over 400 lbs., and one of her goals in life, not only to get married, was to have a baby, and at that point, it was impossible for her,” recalls Amy’s surgeon Dr. Charles Procter in an exclusive sneak peek from Monday’s 1000 Lb. Sisters episode.

It’s been 11 months since Slaton had her son, Gage, and now she’s at the doctor for a check-up on her progress and, before it even begins Amy preemptively tells the doctor that he’ll probably be disappointed with her lack of progress.

“I’m kind of nervous because I don’t think I am where I’m supposed to be in my weight loss goal,” the reality TV star says adding that she avoids the scale because she focuses too much on the number and if she sees it going up, she’ll get “depressed and wanna eat more” so, she says, “it’s best not to look at it.”

As the appointment begins the doctor seems excited to meet Gage for the first time, saying, “it is very special when it is a goal for somebody to be able to get pregnant when they never could before.” He then asks Amy how her weight loss is going.

“I mean, for a while I was doing bad, but we were remodeling a new house, so, you know, you can’t cook at the new house, so you had to do take out,” the 1000 Lb. Sisters veteran tells the doctor before admitting that she hasn’t stepped on the scale in a while. The doctor reminds Amy that the last time she was in his office she weighed in at 288 Lbs. and now he wants to weigh her again to gauge her progress, commenting that he’d like to see her under 250 lbs.

Though Amy is under her last number of 288, at 275 Lbs. She’s far from the goal her doctor has prescribed. “From what I’m seeing, she hasn’t put any more effort back into her health. We’ve pretty much stalled out at this point.”

Days Of Our Lives Spoilers: Abigail Is In Grave Danger – Rafe’s Confession