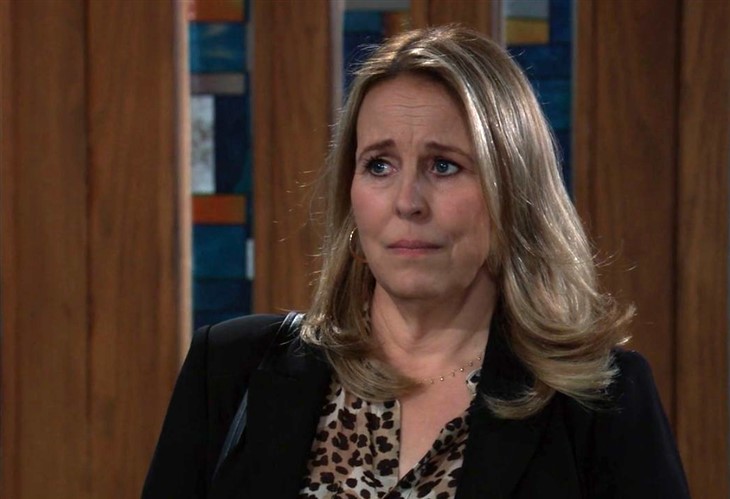 At The Savoy, General Hospital viewers will see the Deception Team celebrate the initial public offering or IPO. Maxie makes a toast to “ahhh” while a smiling Anna Devane (Finola Hughes) and Felicia Scorpio (Kristina Wagner) raise their glasses! Meanwhile, it looks like Brook Lynn is still back at The Metro Court wherein Monday’s General Hospital there had been some tense moments between herself and Gregory Finn (Gregory Harrison). Brook Lynn is terse as she tells somebody that they owe her nothing.

Meanwhile, back at The Savoy, Curtis makes things crystal clear to Selina as he tells her he has made his position clear! Viewers will remember Selina has been trying to talk Curtis into letting her use his club for illegal gambling with a private poker game for local mob figures, and he’s turned her down flat! Curtis does not want to have his place used for anything illegal and certainly doesn’t want to attract crime to The Savoy, but Selina is being very persistent!

General Hospital viewers will remember from Monday’s episode of General Hospital that Elizabeth Baldwin (Rebecca Herbst) had a terrible nightmare in which the ghost of Franco Baldwin (Roger Howarth) told him not to forget him! She then woke up and found the message “Don’t Forget Me” painted in blood-red paint on a painting of a tropical location on Jake Webber’s (Hudson West) easel. Finn talks to Elizabeth, Jake, and Aiden Spencer (Enzo DeAngelis) and tells them it’s time to call in reinforcements!

Across town at Charlie’s Pub, Scott checks in on a dejected-looking Ava who is nursing a martini and asks her if there’s trouble at Spoon Island. Viewers will recall there’s big trouble, as Nikolas Cassadine (Marcus Coloma) allowed Esme and Spencer Cassadine (Nicholas Chavez) to move back into Wyndemere Castle without her permission! Nikolas told her sorry, but he had made her decision and told her Esme was in danger from Sonny Corinthos (Maurice Benard) which she already knew!

General Hospital Spoilers – Esme Prince Has A Confession To Make

General Hospital viewers see Esme and Spencer sitting on a couch at Wyndemere, and Esme looks almost ashamed as she tells Spencer she has a confession to make! Is she pregnant, or isn’t she – only the pregnancy test knows for sure; in Monday’s GH Spencer demanded to see the results of the test, and perhaps it’s come out negative! Over at Charlie’s Pub, Laura is livid as she shouts at someone to tell her she’s misheard, while back at the Deception IPO party Nina tells Sasha Gilmore Corbin (Sofia Mattsson) it’s only the beginning!

Meanwhile, her brand new husband Brando Corbin (Johnny Wactor) is thanking Sonny; he tells him if he can ever repay the favor, he’d be honored! General Hospital viewers will remember Sonny stood by Brando and Sasha through the loss of their newborn Liam Mike Corbin (uncast infant) even though he’d just returned to Port Charles and gotten his memory back.