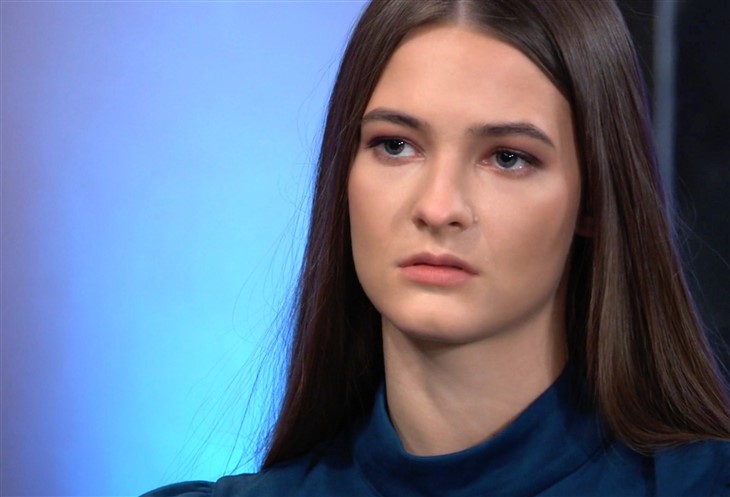 General Hosptial (GH) spoilers reveal Esme Prince may not be faking a possible pregnancy after all. She really does fear that she is about to become a mother.

Esme (Avery Pohl) is thrilled that she and Spencer Cassadine (Nicholas Chavez) are back living at Wyndemere considering that she could not bear another night in that room above Kelly’s. But now, the possible pregnancy comes into play when Ava Jerome (Maura West) arrives home and finds Esme sitting in her living room with her feet kicked up reading a copy of What to Expect When You’re Expecting. Didn’t Ava do that to let people know she was pregnant with Avery Corinthos? It takes one to know one with Ava and she wants to know what the heck is going on and why this girl is even living with her.

Esme just loves torturing Ava with the knowledge that she could be tied to the Cassadines forever now, but she is still not sure she is pregnant and not even sure that she wants to find out. However, she has to find out eventually and Spencer puts his foot down. Take the pregnancy test already so they can just know.

It was easy to see Esme’s fear when Sonny Corinthos (Maurice Benard) confronted her in his restaurant office, but she is even more frightened that the pregnancy test will tell her she is having a baby and she doesn’t quite know what she is going to do with a baby considering that she is only 18 years old. But she figures she needs to get her answer quickly and could work a positive test to her advantage in her quest to break up Ava and Nikolas Cassadine (Marcus Coloma).

Ava will know she is using this pregnancy to ingratiate herself in their lives and want her out of Wyndemere. Meanwhile, Nikolas will want to take care of this young girl who he believes is carrying his grandchild. That will cause a rift between Ava and Nikolas and she didn’t even have to sleep with him as Ryan Chamberlain (Jon Lindstrom) suggested. It’s a win-win. For Esme at least, but for everyone else. Stay tuned to General Hospital weekdays to see how this story plays out.