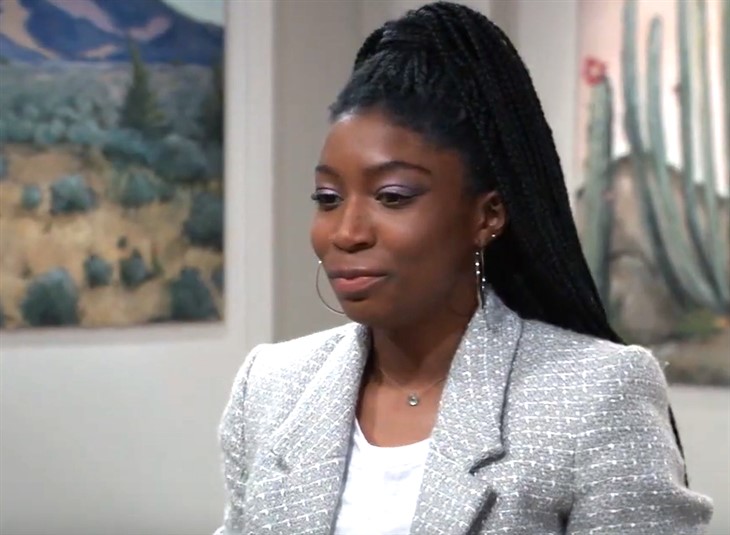 General Hospital (GH) spoilers and rumors tease that the morning of the trial, Trina Robinson (Tabyana Ali) is suddenly left without a defense lawyer! No one can locate Scott Baldwin (Kin Shriner), not even Liesl Obrecht (Kathleen Gati) and GH viewers will wonder, has Scotty been kidnapped?

General Hospital Spoilers – Something’s Fishy But What Is It?

There’s no doubt that something is fishy about this timing, but what is it; Scott has spent all that time trying to work up a defense and now he’s missing? Trina’s friends and family scramble to find a replacement but ultimately, the decision is up to Trina – and she’s seriously thinking about defending herself! The only problem with that is that in most cases, the old saying is true; the person who defends him or herself has a fool for a lawyer!

Neither Trina nor her supporters think a public defender is going to be any good; especially not with no time to present a case. Ava Cassadine (Maura West) has a little experience with legal challenges and being in trouble – she suggests asking for a continuance!

Everyone on Team Trina suspects that Esmé Prince (Avery Kristen Pohl) is to blame; no one would be surprised if somehow she got Scott kidnapped, or worse! After all, if Trina has no one to defend her and she is forced to use a public defender at the nth hour, she’s bound to be found guilty! And if Trina is in prison Esmé has achieved her purpose – keeping her away from Spencer; little does they realize that Esmé is far more interested in his father! But even if Esmé didn’t care about Trina being a threat to her relationship with Spencer, it would be far too late to back out now.

General Hospital Spoilers – Scott Baldwin Has Been Detained But It’s Not What Anyone Thinks!

Indeed, Scott has been detained and it is intentional – but it’s not what anyone thinks; it’s all under control and it’s courtesy of Victor Cassadine (Charles Shaughnessy)! Victor is helping Spencer on a plan to trick Esmé into confessing when she’s called to the stand to testify against Trina and it’s part of his plan. Victor has to make sure both the defense attorney on cross-examination and the assistant district attorney, who he also “had detained” ask the right questions!

Victor has planted both a substitute defense attorney and a substitute ADA and in addition arranged a distraction to keep District Attorney Robert Scorpio (Tristan Rogers) busy!

GH Spoilers – Trina Robinson And Team Trina Have Nothing To Fear

Trina and Team Trina have nothing to fear when the Cassadine clan is on their side – Nikolas Cassadine (Marcus Coloma) has been working behind the scenes as well. Esmé may have thought she could out-Cassadine the Cassadines but she is sadly mistaken. She is caught off guard when she returns to her internship at Spring Ridge and finds her father Ryan Chamberlain (Jon Lindstrom) is no longer there – he’s been busted for faking!

He’s been transferred to Steinmauer Prison and Nikolas and Victor took care of that too; when Esmé testifies she’ll confess everything, being “under the influence” of Victor Cassadine! Little does she know that drink that a nice lady named Eileen Ashby (Heather Mazur) brought her was spiked with truth serum!