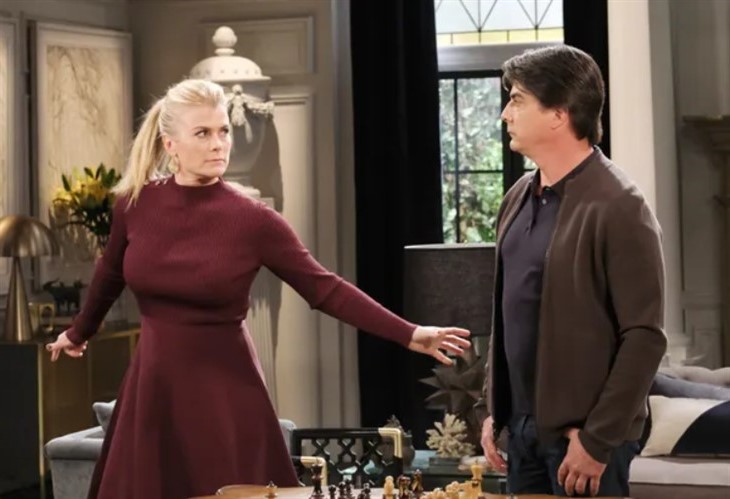 Days of Our Lives spoilers for the week of July 11 reveal that Lucas Horton (Bryan Dattilo) and Sami Brady’s (Alison Sweeney) wedding begins. However, around that same time, Chad DiMera (Billy Flynn) makes a realization about Abigail DiMera’s (Marci Miller) and fires an accusation. Could the wedding crasher cause Lucas to confess to a murder he didn’t commit?

DOOL spoilers reveal that Lucas knows in his heart that he could never hurt Abigail. However, he still wonders if he did the unthinkable the night of his alcohol-fueled blackout. After all, Lucas’ drinking began right after finding out Chad told Abigail the truth about Sami’s kidnapping. Each time Lucas seems relieved to think that he wasn’t responsible, something else happens to reignite his fears all over again.

During the week of July 11, Lucas and Sami’s wedding will begin. However, that is the same time that Chad makes a realization about his wife’s murder. It leads to Chad making an accusation. Plus, it is confirmed that Sami’s wedding turns into a nightmare.

Days of Our Lives spoilers reveal that Chad’s first suspect in Abigail’s murder was Lucas. However, Kate Roberts (Lauren Koslow) swore that Lucas wasn’t responsible and eventually, Chad accepted that.

Even though Rafe Hernandez (Galen Gering) makes an arrest, it is likely not the person who killed Abigail. This is a murder mystery, so expect Rafe to make multiple arrests and for the real killer to be a complete surprise.

When Chad fires off an accusation, will it cause Lucas to make an unexpected decision? Fans have to remember that Lucas is consumed with guilt and he can’t take much more.

Even though Lucas might confess to killing Abigail, he is clearly a red herring. If Lucas is brought to the police station, he will have to share the entire story. This includes his motive for killing Abigail as well as framing EJ DiMera (Dan Feuerriegel) for Sami’s kidnapping.

Of course, the evidence simply won’t add up. Everyone, including Lucas, will realize that he’s confessing to a murder he didn’t commit. With that being said, what does that mean for Lucas’ future in Salem? Lucas might be innocent of murder but he’s guilty of other crimes. That could lead to Lucas going to prison or perhaps ending up in a psychiatric ward just like Philip.

What do you think happens to derail Lucas and Sami’s wedding? Will the guilt prove to be too much for Lucas? Will he end up confessing to a murder he didn’t commit?