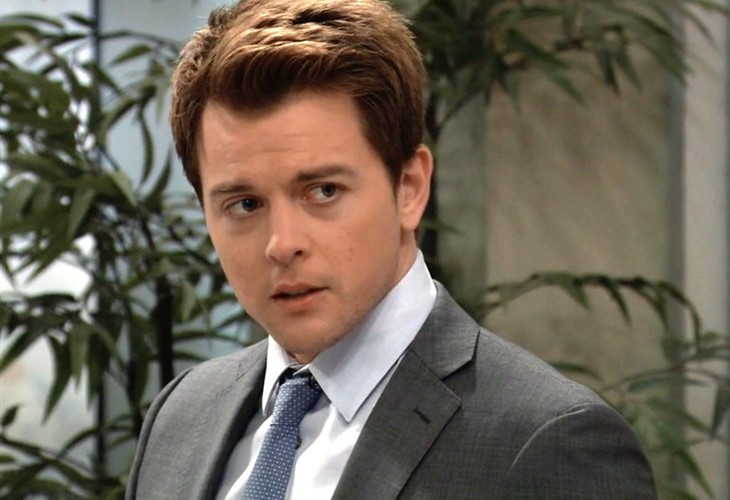 General Hospital spoilers for Wednesday, July 6 tease mistakes and missteps affect those in Port Charles in the next GH!

General Hospital Spoilers – You’ve Been Holding Out On Me

At the Quartermaine stables, Michael Corinthos (Chad Duell) smiles at a beaming Willow Tait (Katelyn MacMullen) and tells her she’s been holding out on him! Willow is looking much better after being released from GH after her collapse at the Metro Court Pool, and her diagnosis of pregnancy from TJ Ashford (Tajh Bellow)! However, a fair question might be if she is still holding out on Michael – have all the rest of the test results come back in?

Previous episodes revealed that TJ told Willow that the other medical tests he ran on her had not yet come back yet. All he had for her at that time is that she is pregnant, which could explain the fainting, but he had also tested for other things!

GH Spoilers – You May Literally Be The Only Person

At General Hospital, Britt Westbourne (Kelly Thiebaud) talks to Kevin Collins (Jon Lindstrom) and tells him he may literally be the only person! It seems plain that Britt needs Kevin’s help with something and it could be relating back to Spencer Cassadine’s (Nicholas Chavez) request for help with Esmé Prince (Avery Kristen Pohl). But as she talks to Kevin she will receive an unexpected item – might it be results on a DNA test that was run? Perhaps she tracked down the prescription Esmé – or, possibly Ryan Chamberlain (Jon Lindstrom) forged on his prescription pad! Or could it be a surprise gift from a secret admirer or perhaps one not so secret that she’d rather didn’t admire her?!

At the Quartermaine stables, Cody Bell (Josh Kelly) arrives to take the job of stable manager that Olivia Quartermaine (Lisa LoCicero) offered him while he had lunch at The Metro Court. He had been having lunch with Dante and Rocco Falconeri (Dominic Zamprogna, Finn Francis Carr) and Olivia walked up to the table and was introduced. Cody interrupts Michael and Willow, but says he thinks he may have the perfect way to repay you, possibly offering riding lessons.

Cody looks like he’s the perfect man for the job, and if he can do something besides muck horse stalls he’s ready, willing and able. Perhaps he can even help keep an eye on Wiley Corinthos (Viron Weaver) and Leo Quartermaine (Easton Rocket Sweda) once in a while!

GH Spoilers – These Are My Reasons For Saying No

At Crimson Magazine, Nina Reeves (Cynthia Watros) explains her reasons for saying no, and it sounds like she turned down Drew Cain’s (Cameron Mathison) deal to buy her magazine. She had made it clear that any new owners had to abide by the same set of rules she had under Drew and under Jasper “Jax” Jacks (most recently Ingo Rademacher). Then Sonny Corinthos (Maurice Benard) had walked in and Nina spilled a part cup of tea about Carly Corinthos’ (Laura Wright) dire situation. Sonny had been trying to get Olivia to spill and she had refused to and Carly had been evasive as well, not wanting his help.

General Hospital Spoilers – Can I Help You

Sonny appeared to be the person Nina was talking to when she explained her reasons for saying no, although it could have been Drew as she handed him his briefcase. Now Sonny asks if he can help, and he’s offering his help to Nina; perhaps Nina didn’t have the funds available to purchase Crimson from Drew either. Mistakes and missteps were made all around when Carly put all her eggs in one basket and then the Aurora Media/ELQ merger didn’t happen.

The fallout is affecting the Quartermaines, Carly, and now even Nina and possibly Sonny as well. Carly still has custody of Sonny and her daughter Donna Corinthos (Ava and Ayla Dormiani) and Avery Jerome-Corinthos (Ava and Grace Scarola) is living there as well.

GH Spoilers – What Part Am I Not Going To Like

At the Metro Court Pool, Drew had come to tell Carly he did something that she wouldn’t like, after returning from talking to Nina at the Crimson office. Nina didn’t seem like she took his deal since she told someone her reasons for saying no about something but Carly won’t like that Drew even asked her! Drew has to be honest with Nina that he had offered Nina to buy Crimson whether she took the deal or not, being sure that Nina will definitely tell Carly! But now what are they going to do if he can’t find a buyer for Crimson Magazine; that is the only thing he could think of to recoup the money! It looks like Carly is losing her half of the Metro Court for sure!

There’s havoc at the Home and Heart channel as Flora Gardens (Susan Batten) has presented Sasha Gilmore Corbin (Sofia Mattsson) with a baby snuggly! Lucy Coe, (Lynn Herring) Maxie Jones, (Kirsten Storms) and Brando Corbin (Johnny Wactor) are on alert as Sasha starts to crash! Brando makes a tough decision concerning Sasha as he says to Lucy and Maxie that he has to stop this!

“This” means the total devastation and meltdown of his wife over their dead baby whom they are still grieving! But it looks like the situation is about to get even worse!

GH Spoilers – Are You Ready For The Baby?

It looks like Haven DeHavilland (Morgan Fairchild) is totally out of the loop about Sasha’s life events as she pops up with the horrible question “Are you ready for the baby?!” Brando might have to go in front of the cameras and pull Sasha out of the on-air interview! Haven and Flora were acting like Sasha is still expecting her and Brando’s baby, who died several months ago after Sasha suffered placental abruption. Liam Mike Corbin (uncast infant) was without placental blood for too long and died as a result in spite of the doctors’ best efforts!