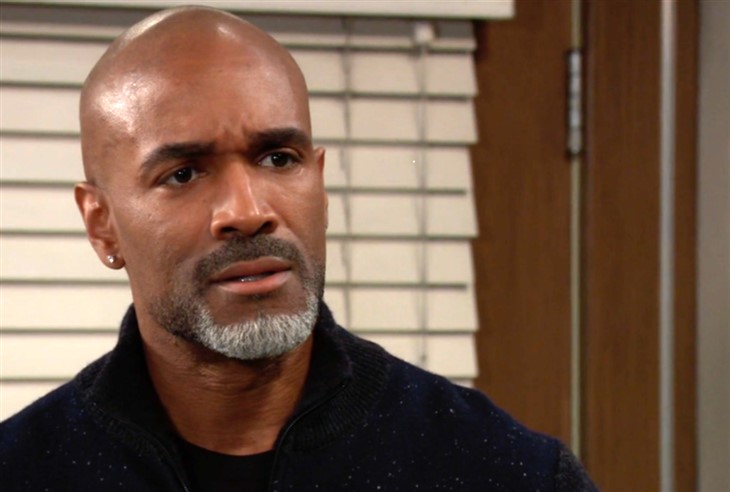 Portia Robinson (Brook Kerr) will try to play peacemaker between Curtis and Trina Robinson (Tabyana Ali) as Curtis tries to explain. Trina was upset because Curtis wasn’t letting her make her own decisions and felt treated like a child when he intervened in her life. Trina wanted to keep working for Ava Jerome (Maura West) at the Jerome Gallery but he talked her into firing Trina and closing the gallery for safety reasons.

Curtis overstepped even though he had Trina’s safety and best interests at heart, he and her mother aren’t even married yet. Trina doesn’t want him to take over the father role in her life, she’s already got a father, Marcus Taggert (Réal Andrews) even though Marcus may likely agree with Curtis.

Portia and Trina continue the conversation, and Trina tells Portia that’s never going to happen. She’s likely talking about the new job at “The Chuck” another prestigious art gallery in Port Charles with a prestigious internship to go with it. She already refused it from Curtis and talked to Josslyn Jacks (Eden McCoy) about her trying for it later on, but because Curtis overstepped she doesn’t want it. She is never going to take this internship because it wasn’t something she worked for herself, even though she would have tried for it on her own later.

It looks like Dr. Hamilton Finn (Michael Easton) has taken Elizabeth Baldwin (Rebecca Herbst) for a well-deserved night on the town at a very fancy restaurant. Perhaps he even decides tonight’s the night to pop the big question, given the odd statement from Elizabeth’s lips, at which he looks askance. Elizabeth had recalled the face of the woman at the bottom of the stairs from the past and then saw it on Finn’s phone.

Elizabeth has to be referring to Reiko Finn (Mele Ihara) who she sketched, then looked in her photos and found confirmation they were in the Mariana Islands at the same time. Elizabeth tells Finn he was better off with a wife that chose him.

At Spring Ridge, Esmé has reunited with her father Ryan Chamberlain (Jon Lindstrom), ironically or perhaps not, dressed as The Hook. Ava had recently explained to Trina she visited Ryan because he killed a victim with a hook. Ryan looks surprised as he asks Esmé if she’s pitching him a new strategy; she knows that the PCPD is looking for a female suspect by eavesdropping. Perhaps now there will be two “hookers” as a team, as “The Hook” will strike again-question is, which one? Ryan does look intrigued as Esmé shares the game plan.

Meanwhile, elsewhere Dante Falconeri (Dominic Zamprogna) is talking to someone as he says he’s got a fix for that. He’d better try that fix quickly, because the PCPD will soon find another victim. However, there are many situations that need a fix around Port Charles, both crime-related and not so crime-related.

He’ll soon have more questions for Dex Heller (Evan Hofer) and that might be over Josslyn telling Dante he was hung in Pozzulo’s freezer from a meat hook. Josslyn would think he’s crazy for not reporting Sonny Corinthos (Maurice Benard) for kidnapping him.

Selina and Cody Bell (Josh Kelly) may be at The Savoy as she tells him something could mean significant problems for both of them. Cody has been working with her regarding the high stakes poker games she runs there. She may be talking about Cody being Mac Scorpio’s (John J. York) possible son with Dominique Stanton (Shell Danielson). Significant problems could happen since Mac is the Port Charles Police Chief of Detectives but she could also be talking about the sighting of Maxie Jones (Kirsten Storms) – he’ll avoid her.

Also at The Savoy, Harrison Chase (Josh Swickard) gets ready to take the stage for his big singing appearance but with some hesitation. He says he’s drop this singing business in a heartbeat, probably to Brook Lynn Quartermaine (Amanda Setton). Chase would much rather be reinstated as a detective, especially considering all the hook attacks around Port Charles.

However, it looks like Chase has a better chance of making the Billboard Top Ten than being reinstated at the PCPD. He’ll just have to make the best of it for the time being.