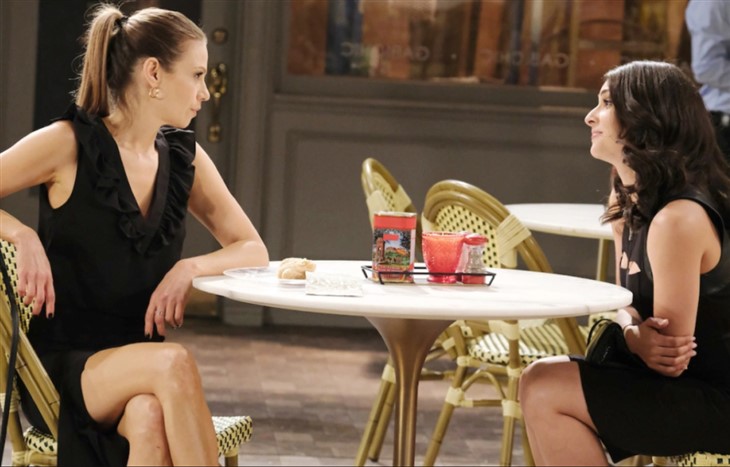 Days of Our Lives (DOOL) spoilers for Thursday, October 6, 2022, reveal two DiMera ‘widows’ ready to do whatever they have to in order to retain and gain power.

Gabi Hernandez (Camila Banus) is not about to give up any claim she has at DiMera Enterprises just because Stefan O. DiMera (Brandon Barash) is back and doesn’t want to have anything to do with her, nor does he want her anywhere near his family company. Gabi plans to marry Li Shin (Remington Hoffman), which will give her the in she wants — or so she hopes.

As a backup, she and Ava Vitali (Tamara Braun) are weighing their options, but Ava seems to have more of them than Gabi. EJ DiMera (Daniel Feuerriegel) has already made an offer she is considering but she also promised to work with Gabi. Will she look out for number one or her fellow female? What she decides may change her life forever.

DOOL Spoiler – Chanel Dupris And Allie Horton On The Outs

Chanel Dupree (Raven Bowens) was perfectly fine allowing Johnny DiMera (Carson Boatman) to sleep on the couch as long as he wanted, but Allie Horton (Lindsay Arnold) had some objections to that and she seems to be jealous of Johnny and Chanel’s friendship. Meanwhile, Johnny can’t get older woman Ava out of his mind and turns to Chanel for advice.

It’s obvious that Chanel feels some pangs of jealousy as she tries to tell Johnny what to do. Meanwhile, Allie seeks advice on her relationship from big brother Will Horton (Chandler Massey).

Nothing uncontroversial could have come from Eric Brady (Greg Vaughan) going to work for Nicole Walker (Arianne Zucker) at Basic Black but that’s just what has happened and now the ex-marrieds are growing closer than ever. In fact, both Jada Hunter (Elia Cantu) and Rafe Hernandez (Galen Gering) find Eric and Nicole in a compromising position and wonder what is going on between them.

Do Eric and Nicole even know and will they ever just tell these two other people goodbye because they have two decades of interrupted history to get back to? Frankly, Rafe and Jada should be able to figure that out for themselves. Stream Days of Our Lives weekdays on Peacock by 6 am EST each morning.