At the Metro Court, Britt catches up with her best friend Brad Cooper (Parry Shen), as she raises a cocktail in the air. She tells him that tonight they’re going to raise a little hell, and it sound like that has to do with the escalation of her Huntington’s’ Disease symptoms. It sounds like she’s just wanting to spend time with old friends and go out with a bang since she’s facing a grim future.

Dr. Austin Gatlin-Holt (Roger Howarth) tried to encourage Britt with all the new treatments and medicines to prolong her life. But Britt hasn’t even told her mother yet although she will soon, right now she’s having a good time with Brad.

At the Port Charles Police Department, Sam McCall (Kelly Monaco) tells Detective Dante Falconeri (Dominic Zamprogna) they might want to do “that” in private. They are probably talking about plans they have for later, after he gets off his shift, but she does have some things to catch him up on. Knowing someone in town has a necklace with four pieces of the Ice Princess could be important, as well as talking about the latest on the search for the Hook. 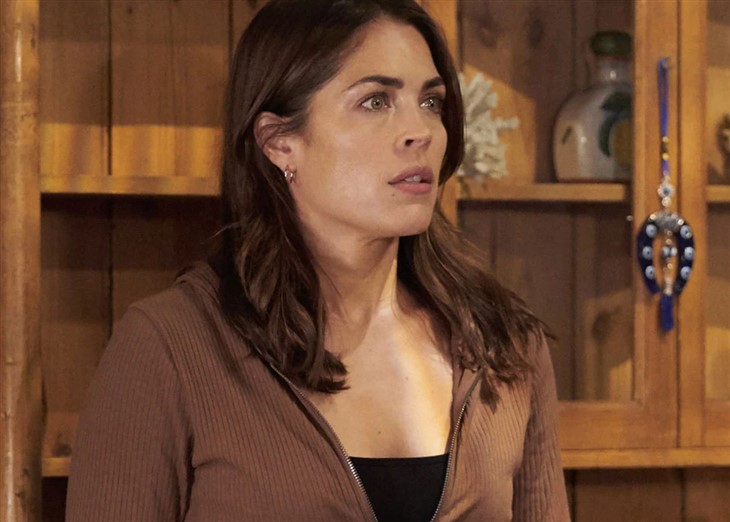 Sam and Dante both know that Anna Devane (Finola Hughes) was set up by Victor Cassadine (Charles Shaughnessy) and is now in the wind, trying to prove her innocence. That necklace might be important to why Victor is in town and why he set up Anna for Lucy Coe’s (Lynn Herring) presumed murder.

It looks like Brad’s Aunt Selina Wu (Lydia Look) is also at the Metro Court, and she issues an invitation to someone she sees there. She tells the person that perhaps the two of them have even more in common, seemingly wanting to set up an affiliation. Perhaps she’s talking to someone who she has some dirt on and wants to leverage them into working with her.

Selina’s little crime family needs more members with the Wu Crime family consisting of her, Brad and a henchman. She looks like she might be trying to recruit some new members.

Laura has questions as she asks someone if they know something she and her associates don’t, likely referring to the missing Lucy Coe and she appears a bit upset. There are many forces in Port Charles she’s finding aren’t what they appear, with one turncoat in her own office. She’s trying to take down Victor like many in Port Charles are and find answers to the questions of why Anna’s been framed. She’ll keep on it until she has answers that make sense.

Robert Scorpio (Tristan Rogers) is starting to become suspicious of his back-from-the-dead ex Holly Sutton (Emma Samms). He talks to her very seriously about friendship being a serious business but so is betrayal. Holly hasn’t been making sense about a lot of things and Robert and other friends have noticed.

Robert will continue putting Holly on the spot to get her to tell the truth. There’s obviously something wrong here and he’s intending to find out what it is.

Sonny Corinthos (Maurice Benard) is supportive of Sasha Gilmore (Sofia Mattsson) as she marks a sad milestone. It’s the one year anniversary of Liam Mike Corbin’s (uncast infant) death and now she’s lost his father as well. Sonny is compassionate as he tells her that’s a lot to deal with, and now she’s dealing with her guardianship and not always getting along with her guardian. Brando Corbin’s (Johnny Wactor) mother, Gladys Corbin (Bonnie Burroughs) is taking over as her guardian, pending court approval, but Sasha doesn’t agree with a lot of her decisions.

It looks like Esmé was banking on a dangerous deception when she told her unborn child “Ace” “bye bye baby!” Nikolas Cassadine (Marcus Coloma, temporarily Adam Huss) thought she was faking her pregnancy pain and problems and called Elizabeth Baldwin (Rebecca Herbst) for help. They go in Esmé’s tower room to find her unconscious on the floor after she’d been holding her stomach and screaming in pain.

Elizabeth tells Nikolas he needs to call an ambulance as she checks Esmé, but can she really fake well enough to fool a nurse? Or has she done the unthinkable and caused herself to miscarry?

Y&R Spoilers: Abby And Chance Throw Love Away – Devon And Amanda Are Done

Days Of Our Lives Spoilers: Gabi’s Heart Is Broken All Over Again