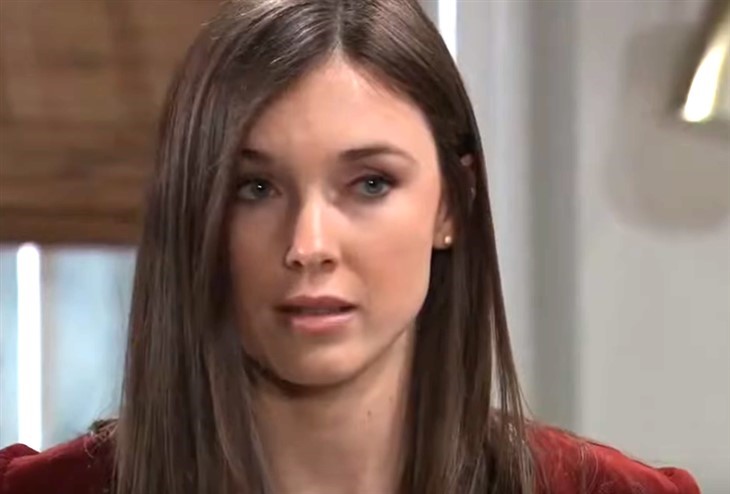 General Hospital spoilers and updates tease that more drama happens in General Hospital on Thursday, March 24 with several Port Charles relationships in conflict and more mysteries that need to be solved!

General Hospital viewers will see Willow Tait (Katelyn MacMullen) apparently coming clean with Michael Corinthos (Chad Duell) about something she hadn’t been previously; General Hospital viewers know that’s not usually Willow’s way of doing things! Willow looks very serious as she tells Michael that she wasn’t being honest with “her” or with him; there were no serious problems found after she fainted, but she might be talking about any one of three women as to the “her”.

It seems to make the most sense that she’s talking about her opinion of whether to allow Nina Reeves (Cynthia Watros) visitation with Wiley Corinthos (Viron Weaver) and Willow’s uncomfortable being in the middle! Viewers could understand why she might have to keep Nina away but not want to, so she couldn’t tell her she would be ok with the visitation, and telling Michael that she agrees with Nina which would not be what he wants to hear!

General Hospital viewers will recall from Wednesday’s episode of General Hospital that Drew Cain (Cameron Mathison) found some inconsistent information on Marshall Ashford (Robert Gossett). Drew found he had been living in Buenos Aires, Argentina in the 1990s under his own name, and that is inconsistent with him being in witness protection!

Curtis was worried because that could invite trouble for his family if he let his father into his life and the danger walked through the door with him! Viewers will see Curtis go to his ex-wife and former DEA agent, Port Charles Police Commissioner Jordan Ashford (Tanisha Harper) and ask for her help – perhaps she can get into databases Drew cannot to find out more about Marshall’s past!

Likely this scene continues, with Nikolas asking someone if something is going to be a problem; either between Spencer and Esme, or possibly Laura having a problem with inviting Victor Cassadine (Charles Shaughnessy). Either situation could cause problems and conflict at the Cassadine’s family dinner!

General Hospital viewers will recall that Victor got fooled by Drew, but only for a short time in a previous episode of General Hospital when Carly Corinthos (Laura Wright) barged into his, Sam McCall’s (Kelly Monaco) and Dante Falconeri’s (Dominic Zamprogna) takedown plan. Thanks to Carly aborting their mission to find out Victor’s true objective, Victor now knows Drew tricked him and only pretended to be activated!

Ava Cassadine (Maura West) sits with Victor at the Metro Court, as he regroups and observes him; Ava tells him she always knows what she wants and she usually gets it! Back at Sam’s place, Sam, Drew, and Anna Devane (Finola Hughes) talk about their investigations, and Dante probably shows up later. Anna tells Drew that even though their op didn’t do what they wanted, he’s still their best chance to take down Victor!

General Hospital viewers will see Harmony Miller (Inga Cadranel) pick Alexis Davis’ (Nancy Lee Grahn) about something unexpected in Alexis’ office at “The Invader”. Harmony doesn’t seem worried, although she may have been surprised; she asks Alexis what she thinks about it. Meanwhile, over at Charlie’s Pub, Nina Reeves (Cynthia Watros) tells Sonny Corinthos (Maurice Benard) she is there following up on something important; it’s likely it’s something about what Nina and Harmony were discussing previously, and she may be looking for Phyllis Caulfield (Joyce Guy).