GH Spoilers: Harmony And Alexis – Let’s Give Them Something To Talk About 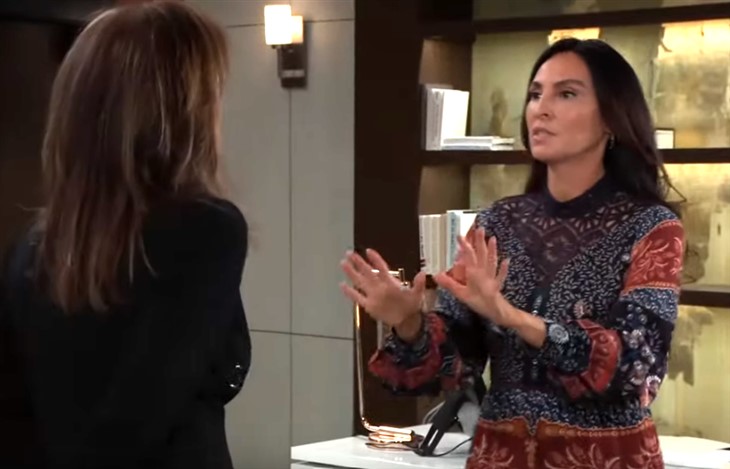 General Hospital (GH) spoilers and rumors suggest that Alexis Davis (Nancy Lee Grahn) and Harmony Miller (Inga Cadranel) are about to take their relationship to the next level. Are the friends about to become lovers?

General Hospital’s Harmony and Alexis were close in prison as a necessity. However, now that Alexis is free, it seems she is spending an awful lot of time together. Alexis spends New Year’s Eve with Harmony. Alexis turns to Harmony for advice. Alexis asks her children’s permission to be friends with Harmony. Seriously, this is more like a potential mate interview than a friendship. Alexis even offers to break off their friendship if her kids don’t approve. Harmony brings Alexis gifts and lights up whenever she sees her. Alexis is always thrilled to see Harmony. Harmony and Alexis have acted like their friendship was some sort of taboo for months. It’s almost like the two are sneaking around to see each other. Now, Alexis and Harmony, have everyone’s okay to be friends, but is there more to this relationship?

General Hospital’s Alexis has certainly been unlucky in love. Alexis woke up to find the man of her dreams dead in her bed. Alexis and Neil Byrne (ex-Joe Flanigan) had just decided to go public when he was killed. Julian Jerome (ex-William deVry) and Alexis were great together until he forced her to lie for him. Alexis’ relationship with Shawn Butler (Sean Blakemore) didn’t work out. Ric Lansing (ex-Rick Hurst) cheated on Alexis. Alexis and Sonny Corinthos (Maurice Benard) weren’t meant to be. Alexis and Ned Quartermaine (Wally Kurth) crashed and burned. The best marriage Alexis ever had was with Jasper Jacks (ex-Ingo Rademacher). Alexis cannot win in love for losing.

General Hospital’s Alexis has never shown an interest in a woman before. However, now that Alexis has been hurt so badly by men, she may want to try something different. How will Alexis’ daughters handle her change in partners? Kristina Corinthos Davis (Lexi Ainsworth) is very accepting of Harmony and friendship. Could Kristina be ok with her mom being in a relationship with another woman, especially Harmony?

Fans know that Sam McCall (Kelly Monaco) has put Harmony on notice about Alexis. Sam will probably try to make it look like Harmony is manipulating Alexis in some way. Will Sam ever accept her mother with Harmony? Can we expect a kiss between Alexis and Harmony soon? Should fans be prepared for more?