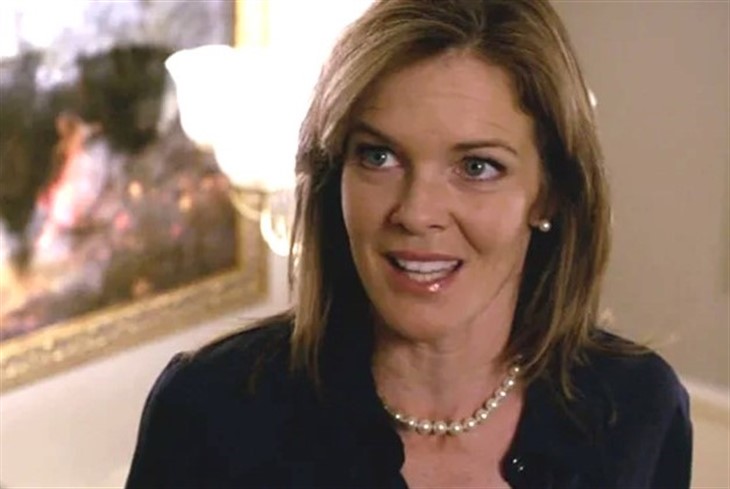 The Young and the Restless (Y&R) spoilers for Thursday, March 24, 2022, reveal quite a shock for the Genoa City scene and Y&R fans.

The Young And The Restless Spoilers – Nikki Has One Less Murder On The Books?

So, Diane Jenkins (Susan Walters) is supposed to be really and most sincerely dead, but when is really and most sincerely dead ever a true thing on soaps. So what if we saw a character die? If writers want the character to be alive again, then so be it. Apparently, that is what happened with Diane Jenkins. Nikki Newman (Melody Thomas Scott) may have shot her dead, but she has been resurrected and is calling herself Taylor Jensen.

Remember, this woman is Kyle Abbott’s (Michael Mealor) mother so he really should be on the show to see this, but what on earth is she doing in California and why does she want to buy Keemo’s house? Did she know Keemo? She doesn’t seem to be Allie’s (Kelsey Wang) mother as fans suspected as she wants to meet Allie, but maybe she is and Allie doesn’t know who her mother is.

When Jack Abbott (Peter Bergman) takes another trip out west, he is really trying to get more answers from Allie and try to convince her to join him in Genoa City. After all, Billy Abbott (Jason Thompson) told him he would make a mistake if he didn’t reach out to her. But, he is about to get the shock of his life. However, it looks like Phyllis Summers (Michelle Stafford) figures out what’s going on before him.

Now that Nate Hastings (Sean Dominic) is coming to terms with the fact that he was taken in by Ashland Locke (Robert Newman) almost as much as Victoria Newman Locke (Amelia Heinle) was, he has to think about his own decisions in life that made him fall for the lies of such a man. Victoria has to now come to terms with the fact that she married a man like this and has to change her life, but what will Nate do?

He has Elena Dawson (Brytni Sarpy) by his side and decides he is going to finally put down roots in Genoa City. He already bought a house a few years ago? What does he plan to do now? Open a private practice and pick and choose his patients better? Stay tuned to The Young and the Restless weekdays to see how these stories play out.