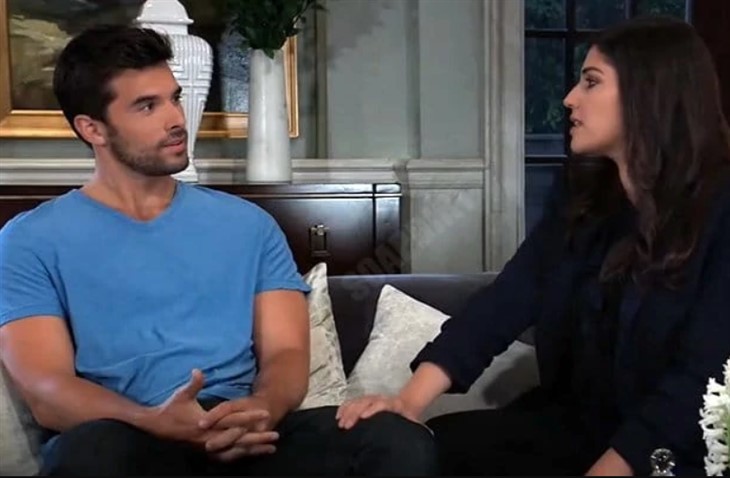 General Hospital (GH) spoilers and updates for Thursday, June 23 tease plots and plans are coming to the surface on GH!

At Kelly’s, Brook Lynn Quartermaine (Amanda Setton) tries to reassure Harrison Chase (Josh Swickard) as he worries about his future with the Port Charles Police Department. He was just coming near the end of his suspension period and just about to be reinstated to full duty when he slugged Linc Brown (Dan Buran)! Officer Rory Cabrera (Michael Blake Kruse) put cuffs on him and brought him into the PCPD.

Brook Lynn is convinced she can get him out of trouble and smiles, telling him hers is the face that is going to fix everything! Just who does she think she’s going to sweet talk into dropping charges for Chase at the PCPD?

Meanwhile, in her office at the PCPD, Port Charles Police Commissioner Jordan Ashford (Tanisha Harper) is discussing a situation with someone! She might be talking to Rory about Chase, as she is saying she’s not convinced something is worth pressing charges! On the other hand she might be talking to Linc, which shows how high an opinion the police have of that scumbag! Hopefully, this is about Chase and getting him back on the force but he does need to do something about that temper of his! This is not the first time that Chase has been disciplined over his temper even though the incidents have always been when he’s been off duty!

At GH, Brad Cooper (Parry Shen) and Britt Westbourne (Kelly Thiebaud) are talking in a hallway and he wants to bring a peace offering but he’s not totally honest with her. They had quite the falling out over his filming her on his cell phone and making a viral GIF of her soaking wet getting out of the Metro Court pool! This was after she was the victim of a crash landing by Cody Bell (Josh Kelly) his first day in Port Charles, parachuting into the pool at the Society Setups meeting!

Britt clearly thinks that Brad might be the one with ulterior motives when he makes his pitch for peace between the two of them. However, she tells him that she has ulterior motives!

GH Spoilers – Now You Can Answer Some Questions

Back at Kelly’s, Dante Falconeri (Dominic Zamprogna) is talking to Cody about his beatdown after the poker game at The Savoy! Cody is hiding something and Dante’s got his number as he tells him now he can answer some questions that he’s been avoiding! Cody is bruised and has obviously been in some kind of a fight and Dante wants to know who did it and why! Ironically, it was Britt who found him after Selina Wu (Lydia Look) sicced her enforcer Li (Samuel Wang) on Cody and found him in a back alley, attending to his wounds! Britt kept reminding herself of the Hippocratic Oath she took to do no harm, but she was there when he needed him!

General Hospital Spoilers – I Have A Personal Stake In This

At The Metro Court, Carly Corinthos (Laura Wright) talks to Olivia Quartermaine (Lisa LoCicero) about her recent business investment, buying enough stock in Aurora Media to make it skyrocket! Carly says she has a personal stake in this war, meaning the war between ELQ, Aurora Media and Valentin Cassadine (James Patrick Stuart). Money isn’t the only personal stake she has in the war and making sure the merger of ELQ and Aurora Media goes smoothly.

Her son Michael Corinthos (Chad Duell) and her hope to be more than a friend Drew Cain (Cameron Mathison) are part of those personal stakes! Carly has a lot of  money sunk into this merger and Aurora Media as well!

GH Spoilers – The Big Questions Will Soon Be Over

Valentin is conferring with Attorney Martin Grey (Michael E. Knight) as the ELQ Shareholders meeting convenes, and Martin says the big questions will soon be over as to who’s on top! Valentin has been trying to convince Ned Quartermaine (Wally Kurth) to come over to his side so they can both retain their power positions in ELQ, feeling pushed out. Ned had never given a sure answer to Valentin but he never gave a sure answer to Drew and Michael either when they offered him a COO position! Drew will give Valentin a warning, however, and this will likely happen at the meeting!

Meanwhile, Drew and Michael are very sure of their success as they toast with a couple of cups of coffee! Drew toasts to the day that everything changes, and they both smile. But, as they say, it’s not over until the fat lady sings, and they haven’t seen any enter the shareholders’ meeting yet! It was obvious that Martin had something up his sleeve when talking to Valentin earlier, so we shall see!