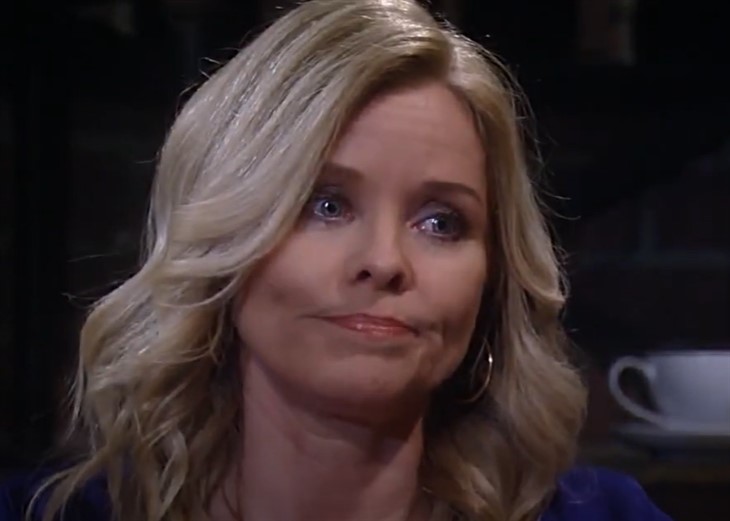 General Hospital (GH) spoilers tease that Maxie Jones (Kirsten Storms) has had few people to confide in these past few months. As viewers know, Maxie gave her baby daughter to Brook Lynn Quartermaine (Amanda Setton) to care for to hide the baby from its evil father, Peter August (Wes Ramsey). Maxie has had to pretend for several months now that her daughter has been abducted. While it’s true that Nina Reeves (Cynthia Watros) knows the truth, Nina has been wrapped up in her own problems. But what Maxie really needs is her mother. And now that Felicia Scorpio (Kristina Wagner) is on her way back to town, Maxie might finally have someone she can trust in her corner!

General Hosptial Spoilers – Felicia Scorpio Has Been Missing From Port Charles Most Of This Year!

Felicia has been away from Port Charles for most of this year. She even missed Maxie’s aborted wedding to Peter in order to care for her ailing aunt. She did take the time to honor her friend, Sean Donnelly (John C Reilly) by attending his memorial earlier this year. But other than that, Felicia has been sorely missing from Maxie’s life. Presumably, after the Floating Rib was blown up last year, Felicia didn’t feel she was needed in Port Charles. But nothing could be further from the truth.

GH Spoilers – Maxie Jones Won’t Be Able To Hide Anything From Felicia Scorpio!

So once Felicia returns to town, her first stop after reconnecting with her husband, Acting Police Commissioner Mac Scorpio (John J York), look for Felicia to make a beeline straight for her daughter. Maxie won’t be able to hide anything from her mother, so look for her to confess that she had known the whereabouts of her daughter all this time. Felicia will certainly understand Maxie’s reasons for handing over her child to Brook Lynn. Felicia has had her own experience with obsessive men. Ryan Chamberlain (Jon J Lindstrom) was obsessed with Felicia for years before he turned his attention to Ava Jerome (Maura West).

Felicia will undoubtedly want to visit with her granddaughter. But she could tip Monica Quartermaine (Leslie Charleson) off if she isn’t careful. Monica has already questioned why Maxie is so attached to Brook Lynn’s daughter. If she catches Felicia doing the same, Monica might put two and two together and figure out Maxie’s daughter is living under her roof. But Felicia has been on many adventures and was once warried to the director of the WSB, so she knows a thing or two about subterfuge. Let’s hope she still has those skills in her arsenal!

Will Felicia figure out where Maxie’s baby is? Will she insist on visiting her granddaughter? Will she inadvertently lead Peter right to his daughter? Anything can happen in Port Charles so stay tuned to General Hospital airing weekdays on ABC. And don’t forget to check back right here regularly for all your General Hospital news, information and spoilers!

Days Of Our Lives Spoilers – Doug And Julie Williams Are On Hand For The Final Battle Against MarDevil!