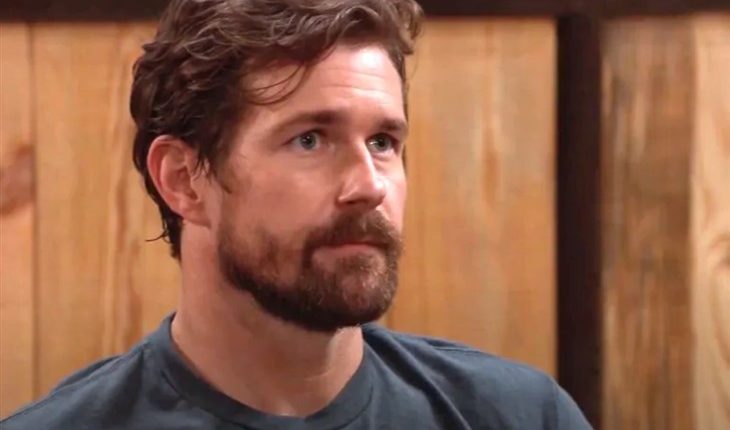 At GH, Cody confronts Britt about her well-being as he confronts her with his suspicions. He can tell there’s more going on than what she admits to and something is definitely wrong.

Britt looks like a deer in the headlights as Cody corners her in front of the snack machines.

Cody looks Britt in the eye and tells her there’s more than that, and you know it. Britt is trying to keep her desperate diagnosis of Stage 4 Huntington’s Disease a secret, but she’s not doing a very good job.

At the Quartermaine gatehouse, Willow has a confession for Michael Corinthos (Chad Duell) as they have a frank discussion.

After she had fainted and he came home to find his mother, Carly Spencer (Laura Wright) there with a fetal monitor, he told her people need to know her condition.

His point was it’s rather difficult to find a bone marrow donor for someone who doesn’t want anyone to know she has leukemia. Willow, reclining on the couch with an afghan over her legs tells him that she needs to do this on her terms.

At the Quartermaine mansion, Olivia Quartermaine (Lisa LoCicero) talks to Robert Scorpio (Tristan Rogers). It sounds like she might be talking to him about the recently departed – or perhaps that should be fled – Holly Sutton (Emma Samms).

Olivia tells him she’s not sure that she deserves that kind of loyalty, although there is a chance she could be talking about Anna Devane (Finola Hughes) as well.

Robert looks a little dejected as Olivia states her opinion, but he’s not giving up on her. Robert will also put his head together with Laura Collins (Genie Francis) in this episode.

Britt shares her plans much more willingly with colleague and friend Dr. Austin Gatlin-Holt (Roger Howarth) at General Hospital as she plans on leaving Port Charles.

Austin is a little blindsided and he questions her decision, since her mother, extended family and friends are all there. Britt has likely made herself a bucket list for what’s left of her life, and perhaps traveling or relocating might be part of that.

Perhaps her mother, Liesl Obrecht (Kathleen Gati) may be traveling with her although they may not have planned that out.

Valentin tells Mac that if he has any evidence, he’d very much like to hear it. Mac is on Anna’s side and still doesn’t believe she shot Lucy Coe (Lynn Herring) off the docks.

Robert knows the truth, but not wanting to implicate Holly, likely has not shared it with Mac-although since Felicia Scorpio (Kristina Wagner) helped, he may have by now.

Felicia posed as an ambulance driver to get Holly into a safe place and Robert got her a new identity and papers to go rescue her son.

GH Spoilers – Who Needs Him?

Back at Carly’s house, she and Drew Cain (Cameron Mathison) are talking about the call he received about a lead on Willow’s birth parents. But Carly plans to continue her deception and hide that she knows Willow’s birth mother is Nina Reeves (Cynthia Watros).

Drew mentions possibly getting Sonny Corinthos’ (Maurice Benard) help and she flips it off, asking who needs Sonny when Drew is on the case?

Michael is right that some people need to know about Willow’s leukemia, and Carly is obviously one of them – she might be more inclined to tell what she knows. Until then, they may as well be going on a reconnaissance mission with no GPS or maps!

Dex deals with an unwelcome visitor at his apartment door as Sonny’s come knocking when he’s inside smooching with the forbidden Josslyn Jacks (Eden McCoy). They look like a couple of deer in the headlights like Britt did at GH, as Sonny keeps knocking and saying he knows that Dex is in there.

It looks like Joss is going to have to take her things and hide out in the bathroom until Sonny gets what he needs.

If he thinks Michael doesn’t like him fooling with Joss, Sonny will even less. They’ll have to figure out something, and quick!