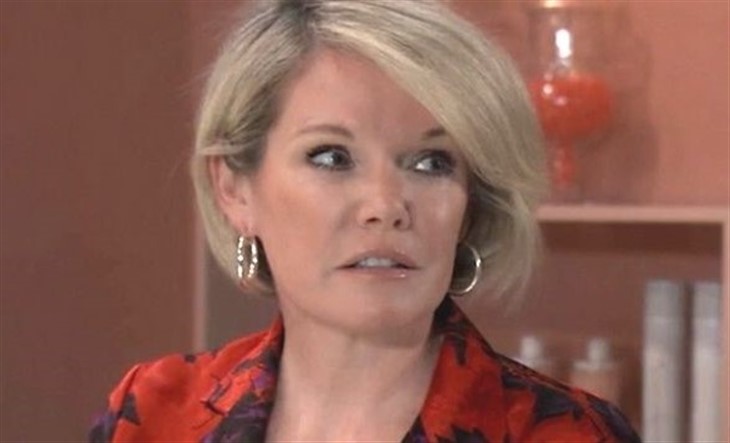 General Hospital spoilers indicate Ava Jerome Cassadine (Maura West) might have gotten a little bit too confident about her position of ability over Ryan Chamberlain (Jon Lindstrom). The more she taunts him, the more we wonder if a part of her inside is testing how real this locked-in syndrome is or whether she can get a tiny part of him to respond to her.

At the same time, every time he does nothing but blink, she reassures herself he’s never coming back for her again. This time will be different. When Ava visits Ryan as part of her plan to help the PCPD find Esme Prince (Avery Kristen Pohl), Ava won’t leave Spring Ridge feeling quite the same level of confidence she did before, and Ryan is going to be plotting.

General Hospital spoilers show PCPD has tasked Ava with helping them figure out what Ryan might know about Esme. So far, he is the only possible lead they have on anyone who may know more about where she came from, what she was really doing here before, and where she’s staying now. The guards at Spring Ridge are sure to be on alert for her reappearance now, but that doesn’t mean Esme hasn’t made sure a few of them are in her corner if she wants to visit Ryan. Certainly, none of them know he is her birth father.

When Ava visits, she’s going to give Ryan the same runaround she’s been throwing at him for the last year. This time, as she leans in to look him in the eyes and tells him everyone knows Esme is back in town and that she has an accomplice, she’ll jump back.

Ava will swear she saw him flinch and move a muscle when he wasn’t supposed to be able to do that. No one else will have seen it, of course, and his latest aide will relay that Ryan may have involuntary movements from time to time but they are of no risk and Ryan isn’t in control of them. Ava will accept the explanation, logically, but her heart won’t, which might be riddled with a smidgen of PTSD.

The truth is, Ryan will flinch. He’s going to be so shocked that Esme has managed to get someone to help her, and he’s going to be equally as disturbed that she didn’t run that part of the plan by him. On the other hand, he might worry she is being held against her will more so than working with someone, and that would explain why she hasn’t been back to help him since she first told him her plan to entrap Nikolas.

Is this the beginning of Ryan making a break for it? Perhaps, but he too might need an accomplice. Is that where Heather Webber (Alley Mills) comes in? Stay tuned for more General Hospital news, updates, and spoilers as they become available.