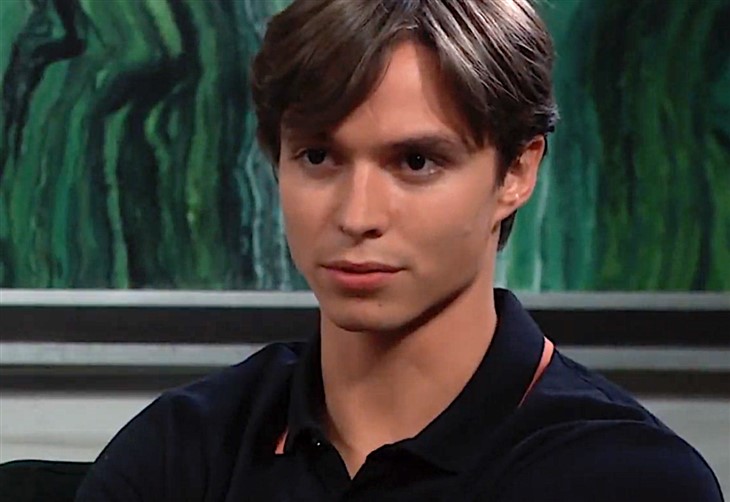 Spencer comes up with a plan to trap Esmé by tricking her into a confession at the Metro Court pool, and he lays it out to Cameron. Esmé doesn’t know that someone saw her flirting with Rory Cabrera (Michael Blake Kruse) at the pool a couple of days earlier and he’s trying to help Trina too. This was brought to Spencer’s attention and he knew it was because Trina and Rory like each other – that’s not making Spencer happy but he can’t control that!

Spencer has spent a lot of time studying Esmé’s triggers and he knows how to push her buttons and which ones and when! He was right on target when he talked to Victor Cassadine (Charles Shaughnessy) and told him about Esmé’s need to belong.

Spencer figures he’s going to take a page from Esmé’s playbook and turn it back on her, and try to trap her admitting she framed Trina for the revenge porn! Cameron is to help him by setting his phone on video record while Spencer pokes the bear and gets into a big argument with her, but they have to be careful. Spencer knows he can’t use leading phrases or accuse her of the frame-up and Cameron has to be careful too; if they use leading phrases it could be considered entrapment. This would cause the whole case to be thrown out of court if indeed, it even came to an arrest; they have to get her on video admitting it first.

Spencer doesn’t understand Esmé’s continued hate for Trina – Trina isn’t even friendly with Spencer anymore, and therefore not a threat to their relationship! But Spencer and Cameron agree if they can get her to confess she took the video and uploaded it to frame her, they’ve got her – of course Cameron hides the phone. Cameron will be busy doing other things out of sight and she won’t even know he’s there; if she saw him she would be suspicious.

Spencer talks to Esmé about spending some time at the Metro Court pool together, figuring she’ll enjoy some relaxing time. But Esmé is smart enough to know something’s up because she knows how to read him as well as he can read her!

Spencer, Esmé and Cameron and his hidden phone set on video is all set to go, and Spencer and Esmé lay on a couple of chairs by the pool. Spencer and Cameron have devised some signals so they can communicate, and Spencer tries to engage Esmé in an argument. Finally Spencer decides he has to go for the big one – and tells her it got back to him she was flirting with the cop! He demands answers and wants to know is she going after Rory because Trina likes him – how deep does her hate for the girl run? Esmé finally slips up and blurts out “enough to see her rot in prison, and I made sure of it”!