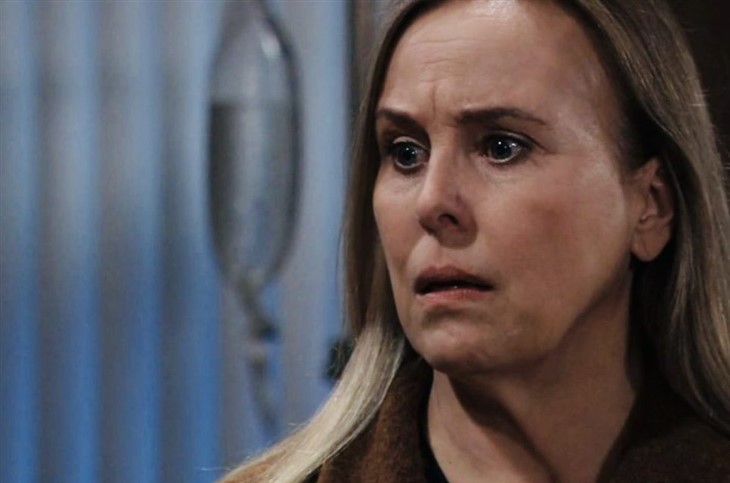 General Hospital spoilers for Wednesday, June 22 tease Port Charles Mayor Laura Collins (Genie Francis) is in trouble! This 15,000th episode of GH focuses on Laura as her family and friends and Port Charles unites to save her!

General Hospital Spoilers – You Know You Are Loved

Kevin Collins (Jon Lindstrom) comforts his frightened wife outside a meeting room at GH, and tells her she doesn’t need a tidal wave of votes to know that she’s loved! Kevin tells Laura as he looks her in the eye that one of those people who loves her is looking her in the eye! Laura had been feeling sick, she was so nervous; and tells Kevin not to make her cry, since it’s a bad look, to which he responds there’s no such thing.

Alexis Davis (Nancy Lee Grahn) got early word at The Invader that a powerful political opponent had surfaced to attack Laura and her mayoral position. She had called Laura to tell her that something catastrophic was going to happen!

Scott Baldwin (Kin Shriner) Laura’s high school sweetheart and first husband welcomes her to the meeting to save her hide as Kevin escorts her in the door. Laura greets those who are gathered; Mac Scorpio (John J. York), Robert Scorpio (Tristan Rogers), Alexis, Laura’s former niece in law Carly Corinthos, (Laura Wright) Samantha McCall (Kelly Monaco) and Curtis Ashford (Donnell Turner). Scotty has saved Laura’s hide many times in the past, as longtime viewers will remember, athough both situations were accidents.  As teenagers, he literally buried a body and hid her involvement in killing one of Rick Webber’s (Chris Robinson) mistresses as well as David Hamilton (Jerry Ayres)! Cyrus Renault (Jeff Kober) had dug up the dirt on Laura’s killing of David Hamilton when he first came to Port Charles.

At The Savoy, Curtis has another issue to deal with, as he talks with Selina Wu (Lydia Look) and Sonny Corinthos (Maurice Benard). Sonny goes back many years as a friend to Laura, having taken over Frank Smith’s (Joe Cortese) after Laura and Luke Spencer (Anthony Geary) went on the run! The conversation with Selina and Sonny probably started with talking about the problems they’re having with their businesses thanks to Michael Corinthos (Chad Duell)!

Sonny and Curtis already know who’s pulling those strings, as does Selina. The strings that Curtis tells Sonny about figuring out who’s pulling them probably refer to Laura’s attack.

Portia Robinson (Brook Kerr) and Britt Westbourne (Kelly Thiebaud) watch as Laura walks by to get on the elevator at GH, likely after the meeting to save her hide! Britt worries to Portia that Laura very well could be a dead woman walking! This political opponent may be a danger not only to Laura’s mayoral position but to her life! It’s doubtful after all these years that someone has found that sunken box of votes Spencer Cassadine (Nicholas Chavez) dumped in the harbor after hacking into the voting machines! This is probably much more a dangerous operation than trying to invalidate a past election!

General Hospital Spoilers – How Long Have You Been Waiting To Even The Score?

It turns out that Laura’s old enemy is waiting for her in front of the elevator, and she asks how long have they been waiting to even the score? This will obviously be someone she knows, and it does certainly seem it is someone from her past! This person has great political power and clout, and has a score to settle with Laura.

This person apparently is well known, because Alexis got a news leak and was able to warn Laura of something catastrophic! But who is this mystery person – Cyrus wouldn’t be qualified to run for office and Jennifer Smith (Holly Gagnier) is in WSB custody; all will be revealed!