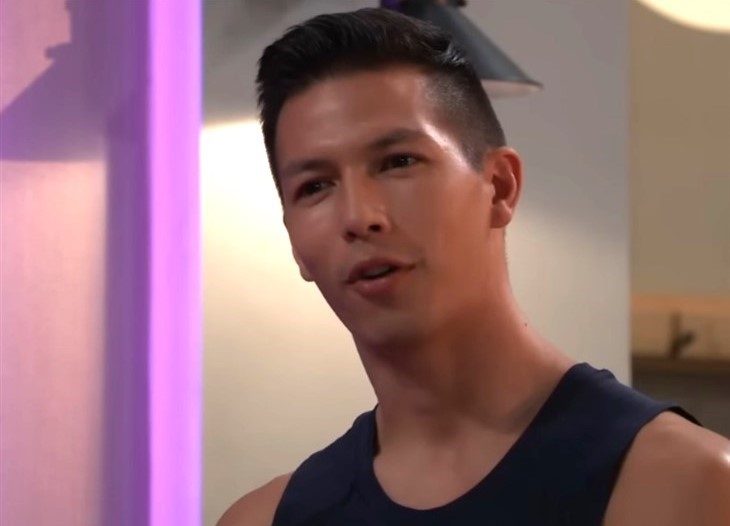 General Hospital (GH) spoilers and rumors tease that Rory Cabrera (Michael Blake Kruse) might be adopted, considering he looks Asian but his name is Hispanic. He bears some resemblance to Reiko Finn; (Mele Ihara) could he really be Reiko and Jeff Webber’s (Richard Dean Anderson) love child?

General Hospital Spoilers – There Are Things You Don’t Know

A few weeks back Rory was on a date with Trina Robinson (Tabyana Ali) and he told her there are things she didn’t know about him. However, he didn’t give a clue to what those things might be; he’s never told about his family or where he came from, other than he’s a PCPD rookie. Marcus Taggert (Réal Andrews) doesn’t trust him but then what father trusts someone he doesn’t know with his daughter, especially not when he’s a former PCPD detective himself?

There are suspicions by many GH fans that Rory in fact is the Port Charles Hook, but that may not be what he’s hiding. He may simply be adopted and may not even know who his birth parents are, but he would be about the right age to have been conceived in the mid to late 1990s.

There’s an old wives’ tale that says love children always look like their mothers, but in many cases that turns out to be true. When you look at a photo of Rory next to the photo of Reiko, he has her eyes, her nose, and her smile. There’s decidedly more of Reiko in Rory’s face than Jeff’s, even though he would not be Jeff’s only love child from an affair, Hayden Barnes (Rebecca Budig) being another. Steve Webber (Scott Reeves) is Jeff’s oldest love child, with Heather Webber (Robin Mattsson) while he was married to Monica Bard Quartermaine (Leslie Charleson). Steve is the only one of Jeff’s children that really looks anything like Jeff.

General Hospital Spoilers – Will It Ever Be Revealed?

Viewers might wonder if it will ever be revealed if Rory is the child of Jeff and Reiko, and there’s a good chance it might if Taggert gets worried enough. He also was an agent in the Drug Enforcement Administration, a partner with Port Charles Police Commissioner Jordan Ashford (Tanisha Harper) although he may not find anything through normal channels. On the other hand, maybe Rory will be the one who wants to find his birth parents; Trina can give him some good advice about how to do it.

Trina did a genealogy project for school a couple of years back, and playing genealogy detectives together might be fun. Rory might find one half-sister to meet as well as another who’s missing and it’ll take his PCPD skills to start that case.