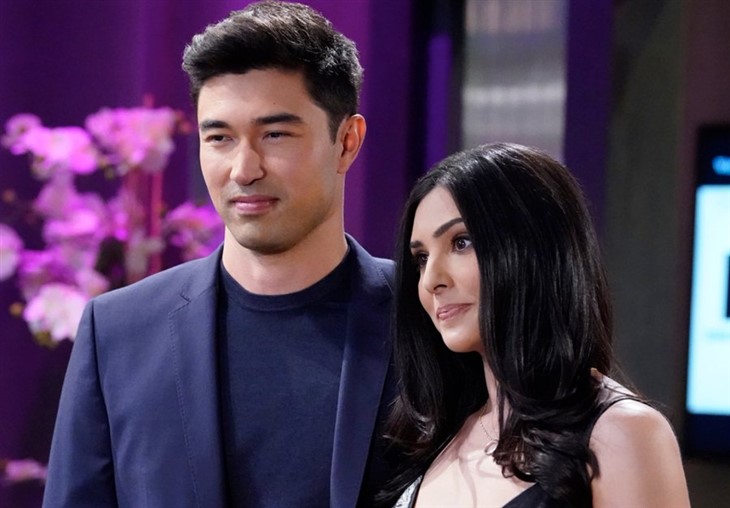 Days of Our Lives spoilers indicate that Li Shin (Remington Hoffman) is about to lose Gabi Dimera (Camila Banus). Will Stefan Dimera (Brandon Barash) remember his love for Gabi or will Li’s lies come to light?

Days Of Our Lives spoilers reveal that Li has known that Stefan Dimera (Brandon Barash) has been alive for some time. Li discovered Stefan in Dr. Rolf’s (Richard Wharton) lab while Rolf was in prison. However, Li had no idea that Rolf was going to revive Stefan so soon. Li has an agenda when it comes to Gabi and it shows.

Li insisted that Rolf try to brainwash Stefan to keep him away from Gabi. LI’s plan worked so far. However, Stefan may have overheard Li demand that Rolf brainwashes him. Stefan may remember Kristen Dimera’s (Stacy Haiduk) part in this as well. Will Stefan remember anything that happened before he left Rolf’s lab?

Stefan hasn’t forgotten his wife when he first woke up. Rolf kept Stefan alive with an artificial heart for some time before Stefan’s twin, Jake Dimera (Brandon Barash) was killed. Rolf knew that Jake’s heart would be a perfect match since he and Stefan were identical twins. However, once Stefan woke up, he was quickly knocked back out and brainwashed.

Stefan has made his way to the Dimera mansion, and his wife. Unfortunately, Li was on hand to sedate Stefan and get him back to the lab. Stefan was quickly hooked up and brainwashed on Li and Kristen’s orders. Now Stefan is convinced that he doesn’t love Gabi but wants to be with Chloe instead. Gabi has tried to get through to Stefan but so far, she’s had no luck. Will Gabi’s luck change before she marries Li?

Gabi is all set to marry Li but she would take Stefan back in a heartbeat if he would give her any encouragement. Now that Stefan may have his memories returning, he could interrupt Gabi’s wedding and profess his undying love for her. Stefan could also tell Gabi that he remembers Li and Kristen’s demands to brainwash him. Either way, Gabi could undoubtedly walk away.

Gabi may call the wedding off on her own as well. Gabi had no idea that Stefan was alive when she agreed to marry Li. Now that Steffy is alive, there could be an issue come up that requires postponing the wedding. What if Gabi and Stefan are required to divorce first? Could Gabi decide she wants to give Stefan time to remember her? Could Gabi and Stefan reunite after his memories finally return? Perhaps, Stefan could fall in love with Gabi again in the meantime.