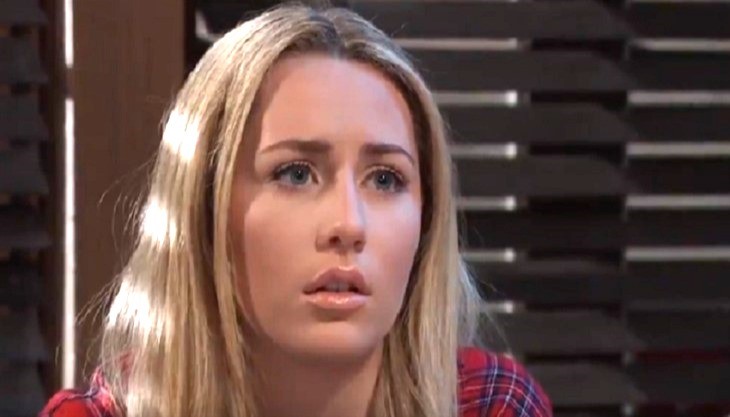 General Hospital spoilers and updates tease that Josslyn Jacks (Eden McCoy) and Dante Falconeri (Dominic Zamprogna) will brainstorm. They’ll go over everything that Josslyn knows happened on the night of Brando Corbin’s (Johnny Wactor) murder; can they find new clues?

Dante already knows that Josslyn gave a statement that she had followed Dex Heller (Evan Hofer) out the back of Charlie’s Pub because he forgot his sunglasses. But she hadn’t been able to give them back to him until much later, when she ran into him at The Metro Court Pool. Others had witnessed Brando having an eye on Dex as he sat at a table with Josslyn, and when she followed Dex, Brando followed Josslyn.

But by the time Brando got out there, Josslyn was gone and Dex was nowhere to be seen; instead what Brando encountered may as well have been the Grim Reaper. The Port Charles Hook was there when Josslyn went out, but hesitated when she came out and looked around the dumpster; the hook struck Brando after she left.

Dante has been suspicious of Dex for more than one reason since he learned he was going to be his father’s replacement for Jason Morgan (Steve Burton). No one knows who he really is or where he really comes from and Brando was suspicious of him as well; and that is a big deal to Dante. Brando’s suspicions, though they seemed to bond over military talk gives Dex a motive for murder – if he trusted him, he wouldn’t have followed Josslyn out the back door of Charlie’s. After Dante brought Dex in and questioned him about why he was at all three crime scenes of the hook attacks he wants Joss to go over that night again. Perhaps there was a detail she disregarded or missed; for instance, did she hear anything that sounded like jewelry jingling?

As for Josslyn, she wants to help solve the mystery of who the Port Charles Hook is more than ever now, that close family friend Diane Miller (Carolyn Hennesy) was attacked. Port Charles Police Commissioner Jordan Ashford (Tanisha Harper) thinks that Sonny Corinthos (Maurice Benard) is the only common link to the murders, as does District Attorney Robert Scorpio (Tristan Rogers). But Dante thinks that there may be more to it than that and other theories should be considered, as that might just be a distraction.

That’s why Dante and Josslyn get together and brainstorm not only about that night to see if she remembers more details, but about the case in general. Dante can’t reveal too much but he can give her enough details to bring up clues that may be relevant.