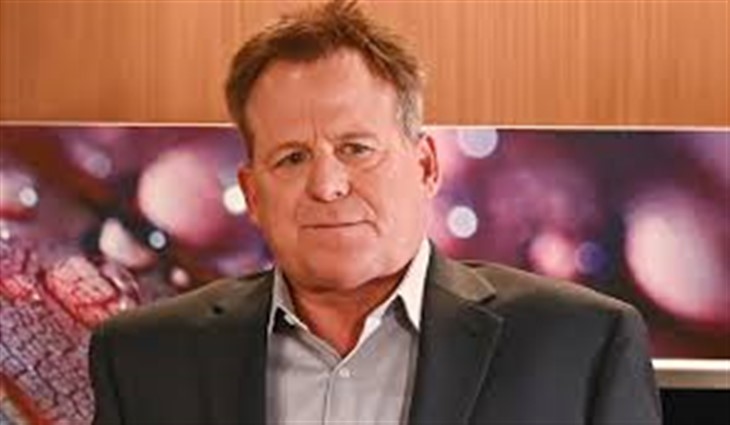 General Hospital spoilers and updates tease that recently Kin Shriner and Maurice Benard speculated what might happen if Scott Baldwin stole Nina Reeves (Cynthia Watros) from Sonny Corinthos. Kin (Scott) and Maurice (Sonny) joked about it on Maurice’s State of Mind podcast, Kin later announcing a joint Zoom event with Cynthia (Nina) and Maurice picked it back up!

Maurice thought it would be the ultimate revenge for Scotty if after all these years after Karen Wexler’s (Marie Wilson) at Sonny’s club, for Scott to steal Nina from Sonny. Longtime viewers will remember Karen was Scott’s daughter and she died from a drug overdose, having gotten hooked in Sonny’s club while working as a stripper, she was a teenager. That experience affected Sonny profoundly as well, and that’s why he won’t allow drug running in his mob territories.

They were talking about that long ago storyline arc on “State of Mind” and it was so long ago Maurice forgot the character name for Karen. But both actors are well aware that the feud Sonny and Scott have over that incident will never die, and Maurice started tweeting regarding the Zoom meeting Scott’s taking Nina too.

GH Spoilers – It Would Be Good Revenge

Stealing Sonny’s woman would be good revenge for Scotty, and it would hit him particularly hard right now. Sonny’s lost Carly Corinthos (Laura Wright) and Michael Corinthos (Chad Duell) and basically sacrificed those relationships to be with Nina. But they won’t take him back, it’s too late; Scotty could actually drive Sonny over the edge, and although Scotty may enjoy fantasizing revenge in that way he probably won’t.

General Hospital spoilers show Scotty has lost three children to death and Sonny has lost two including his first wife’s miscarriage, Morgan Corinthos (Bryan Craig) plus Dev Cerci (Ashton Arbab). On top of that Brando Corbin (Johnny Wactor) who he was close to, and Carly’s miscarriages, and others he was very close to – Scotty’s not that vengeful.

General Hospital Spoilers – Another Reason He Won’t Do It

Another reason Scott won’t steal Nina from Sonny is because he’s very involved with her aunt, Liesl Obrecht (Kathleen Gati). He knows how Liesl can be when she’s pushed to the wall, being aware of her kidnapping Peter August (Wes Ramsey) and torturing him. Perhaps Sonny should hire Liesl as his new enforcer instead of Dex Heller (Evan Hofer)!

Scott knows if he took up with Nina, he’d be setting himself up for a death by Liesl injection, niece or not. Not to mention Nina wouldn’t do that to Sonny or to her aunt.