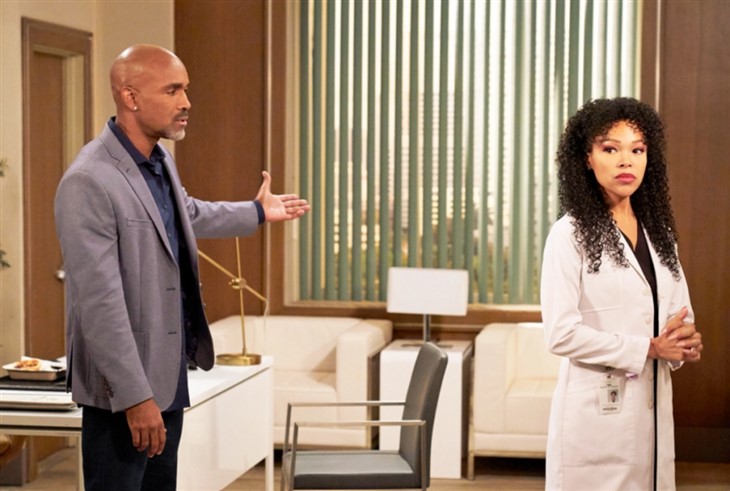 General Hospital spoilers tease that Dr. Portia Robinson (Brooke Kerr) is obviously worried about the fact that Curtis Ashford (Donnell Turner) and Jordan Ashford (Tanisha Harper) are still married. Jordan has taken the blame for their divorce not being finalized, although it was really Stella Henry (Vernae Watson) who is responsible. But at the moment, both Curtis and Portia suspect that Jordan was just stalling because she wants to hold on to Curtis.

General Hospital Spoilers – Curtis Ashford Broke Up With Jordan Ashford Because Of Her Dishonesty!

General Hospital spoilers show Jordan and Curtis initially broke up because Jordan was unable to be completely honest with him. Curtis hates lies but what he doesn’t know is that Portia is likely being just as dishonest about some important details. As viewers know, Portia and Curtis had an affair years ago. And while Portia has denied it, it’s becoming more evident that Curtis could very likely be Trina Robinson’s (Tabyana Ali) biological father. For Trina’s whole life, she has believed that Marcus Taggert (Real Taggert) is her father.

Jordan already suspects that Portia is keeping a big secret. She may even suspect the truth about Trina. But she doesn’t have any proof and really, it isn’t her place to stick her nose into it. But that doesn’t mean Jordan will stop looking into it. She really does still love Curtis and if Portia is lying to him, she may feel that Curtis has a right to know. Most likely, this will all come out right as Portia and Curtis are about to get married!

With both Portia and Jordan having lied to him, Curtis may eventually wash his hands off both women. And while he will be happy to find out that Trina is his daughter, Curtis’ relationship with Portia is likely over for good once her lies are exposed. But Jordan lied to Curtis as well, so Curtis will have to decide just what he can live with, and what he can’t. Both women may find themselves on the outside looking in.

Will Portia’s lies catch up to her? Will Jordan reveal the truth? Who will Curtis end up with? Anything can happen in Port Charles so stay tuned to General Hospital airing weekdays on ABC. And don’t forget to check back right here regularly for all your General Hospital news, information, and spoilers!