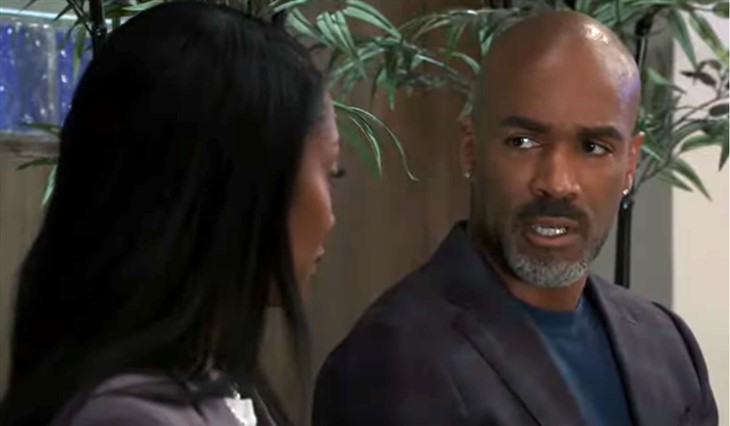 General Hospital (GH) spoilers indicate that Curtis Ashford (Donnell Turner) is still married to Jordan Ashford (Tanisha Harper). Curtis has been trying to reassure Portia Robinson (Brook Kerr) about their relationship. However, Portia questions if Curtis would still be with Jordan if she hadn’t lied.

General Hospital spoilers reveal that Portia has lied to Curtis for years about the paternity of their daughter. Portia raised Trina Robinson (Tabyana Ali) as Marcus Taggert’s (Real Andrews) child. Portia fears that Curtis will end things if the truth comes out. Will Portia come clean before this goes any further?

Curtis finds lies very hard to forgive. Secrets and lies are what come between Curtis and Jordan in the first place. Jordan lied about faking Taggert’s death to keep him safe from Cyrus Renault (ex-Jeff Kober). However, the lies piled up and Curtis couldn’t take any more. Curtis called it quits because Jordan was doing nothing but keeping secrets from him. Frankly, she still is.

Portia and Jordan were trapped in a basement before she began to have kidney failure. The two were trapped in a house filled with gas and both eventually passed out. However, Portia mentioned she needed to tell the truth about Trina’s paternity cluing Jordan to the lie. Jordan has known since before she went to the clinic.

Now that Jordan remembers what Portia said, she is in a very good position to make things right with Curtis. Jordan may even be able to get her husband back when he realizes how long Portia has been lying to him. Can Jordan and Curtis repair their marriage after Portia’s lies are exposed?

Jordan is very eager to cover for Stella Henry’s (Vernee Watson) part in this. Jordan could have thrown Curtis’ aunt under the bus and exposed the truth. However, Jordan is once again lying to Curtis. Telling the truth about Portia’s lies will not cover Jordan’s lies. Both women have treated Curtis very unfairly. However, both were thinking they were doing what was best. Will Jordan and Curtis decide to reunite and try again?

Is Curtis going to be done with Portia once and for all? Curtis broke up with Portia over lies as well as he did Jordan. However, Jordan isn’t the one who kept his child from him. How can Curtis forgive Portia for this? Is there any way to repair this relationship once the truth comes out? Will Curtis choose Jordan after his heart-to-heart talk with Portia?

Days Of Our Lives Spoilers: Stefan Accepts EJ’s Proposal To Team Up