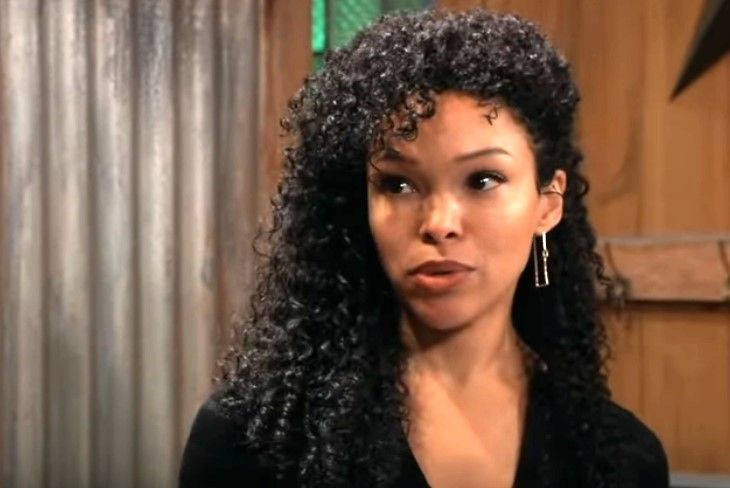 General Hospital (GH) spoilers tease Portia Robinson’s (Brook Kerr) paranoia might get the best of her soon. The doctor’s recent engagement to Curtis Ashford (Donnell Turner) has hit the bricks on wedding planning in light of the news that Curtis’ divorce to Jordan Ashford (Tanisha Harper) was never finalized. But Portia has bigger problems on the horizon. The closer she’s come to becoming Curtis’ wife, the harder it gets for her to keep the truth to herself that Curtis is her daughter Trina Robinson’s (Tabyana Ali) real father.

While Portia deliberates over how to handle the secret about Trina’s paternity, it becomes questionable whether she’s only entertaining dredging up the past because of Curtis’ father—Marshall Ashford (Robert Gossett)—being diagnosed with Schizophrenia, a hereditary disorder. Or does she really think Curtis deserves to know the truth before marrying her?

The former is likely the truth since learning about Marshall’s illness is what spurred Portia to start looking into whether the genetic precursors may have been passed onto Trina, and Portia hasn’t bothered with a DNA test or trying to tell Curtis at all.

In the land of Port Charles, love never dies. Their love affair from years ago was lit ablaze after Curtis decided to leave his then-wife Jordan. While Curtis’ marriage fell apart due to Jordan keeping secrets from him about things he felt he had a right to know, Portia’s relationship with Curtis came together with Portia being fully aware of her new beau’s heartbreak and demand for honesty.

Now Portia is growing concerned that she’ll be too much like Jordan for Curtis to stick around. Portia recently asked Curtis if he would still be with Jordan had she not lied, and his reply that he would be had her shook! It’s looking like their dreams of driving off into the sunset together are coming to a close.

There are multiple players in this game who will have to mend a broken heart. Based on his personal relationships history, Curtis doesn’t seem likely to work through things with Portia after learning the truth—especially if it doesn’t come from her.

Portia’s ex-husband Marcus Taggart (Réal Andrews) is sure to feel the effect of losing a part of the relationship he’s had with his daughter all of her life—that is, if he’s not been helping Portia hide the truth all along. Peripheral members of the family like T.J. Ashford (Tajh Bellow), Aunt Stella Henry (Vernee Watson), and Marshall are also likely to have some opinions about what Portia has done.

But most importantly, Trina will likely take this hit the hardest. Growing up with one father and only coming to find he was never her dad to begin with during her college years will be a brutal blow for Trina to digest on the heels of her trial, especially knowing her own mother kept the truth from her.

It was a nice year watching Curtis and Portia fall in love, embrace one another’s families and buy a home \together, but the forecast for their relationship isn’t looking good. How will Curtis get past Portia keeping his child from him all these years? What will the aftermath look like for Curtis and Trina as father and daughter? Where does Taggart fit into the mix, and will Curtis lean on Jordan for support? Check back for daily updates on what comes next for our friends in Port Charles.