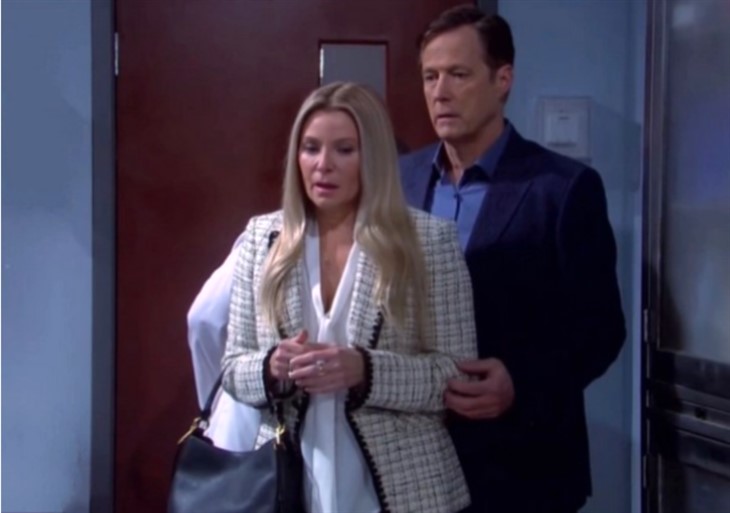 Days of Our Lives spoilers and updates tease that Jennifer Deveraux (Cady McClain) will have something to confess when she comes home from a late night drive. Will she tells Jack Deveraux (Matthew Ashford) and Julie Williams (Susan Seaforth Hayes) she saw her dead daughter alive, Abigail DiMera (Marci Miller)?

Days Of Our Lives Spoilers – Driven Over The Edge

Jennifer’s driven over the edge when Gwen Rizczech (Emily O’Brien) catches her with her opioid pills and wants to help. Gwen tries to go after Jack after she comes back into the Horton House to get her purse, to tell him Jen’s in trouble. Jennifer apparently manages to prevent Gwen from telling Jack, and later, he leaves again to follow up on a story about a new suspect in Abigail’s murder.

She takes even more pills, and suddenly she sees Abigail, who puts her hand on her mother’s shoulder. Jennifer gets behind the wheel, and goes for a drive, but things go horribly wrong; she manages to get home in one piece, however.

Apparently Jen is gone for several hours, because when she finally makes it home Julie and Jack are very worried. They can probably tell that she is not herself, because the amount of pills she’s taken put her over the edge of sobriety and possibly of sanity. Previously, Jack had found her pills, whether Gwen told him later or he found her himself, a weekly preview shows it all. He tells Julie that Jen is taking painkillers again; Julie says “oh, no.” Jen tries to explain what happened, and she might tell them she saw Abigail.

Gwen will be found injured by Rafe Hernandez (Galen Gering) and taken to the emergency room, and that could be part of what goes horribly wrong on the road. Jennifer has snapped and desperately needs help, and soon her brother Mike Horton (Roark Critchlow) will arrive in Salem; they are the two remaining children of Laura Horton (Jaime Lyn Bauer). Julie’s uncle Bill Horton (most recently John Martin) was their father and dealt with Laura’s mental illness for many years.

It looks like Jennifer will get the help she needs when Mike gets her back into rehab and therapy, Gwen was right to spill the tea. Poor Jennifer may not be back with Jack for a long time, as her grief has driven her beyond sanity; Gwen may have redeemed herself by telling Jack.