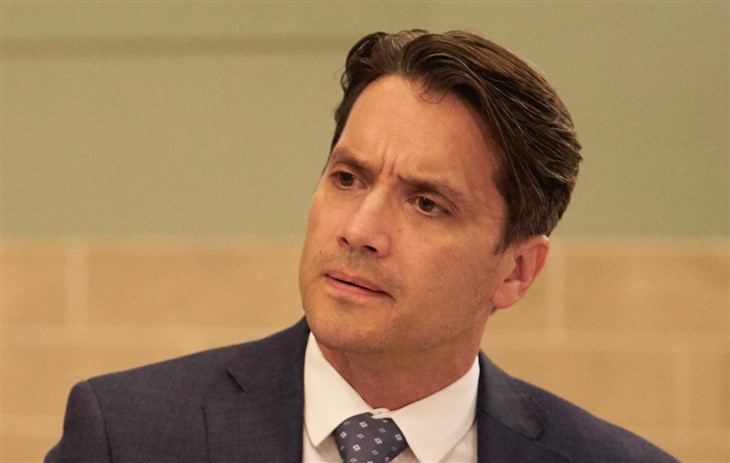 General Hospital spoilers and updates tease that Detective Dante Falconeri (Dominic Zaprogna) will have a hunch, and as the result, Dex Heller (Evan Hofer) will be on the hot seat. Dante may not feel like it’s a coincidence that Dex has been in the area during all three of The Port Charles Hook attacks.

After Brando Corbin (Johnny Wactor) was murdered, Port Charles Chief of Detectives Mac Scorpio (John J. York) had Dex brought in for questioning because he’d been at Charlie’s Pub. He had been seen talking to Josslyn Jacks (Eden McCoy) by Brando, and had left his sunglasses, and Josslyn followed him out. Brando followed Josslyn, and soon after was attacked; she had left before the attack, but didn’t see the attacker or Dex but this came up in questioning.

General Hospital spoilers show Dante knows that even though Dex helped Josslyn get Ava Cassadine (Maura West) to General Hospital after her attack, he has a hunch. Dex was nearby when she was attacked, when Brando Corbin was attacked, and now he finds out he was near Diane Miller’s (Carolyn Hennesy) attack as well.

There seems to be a pattern here, and Dante thinks it is too much of a pattern to ignore; and Brando gave a clue of hearing jingling like bracelets. Dante has seen Dex at the Metro Court Pool, and he wears two military dog tags on a chain, and gathered from the wound placements is the right height. Dante very much believes that although his presence near all three attacks may be circumstantial, it’s enough to bring him in again for questioning as a viable subject.

This time it’s Dante, not Mac, doing the questioning and Dex is in the hot seat once again. Not only is he under scrutiny by Sonny Corinthos’ (Maurice Benard) oldest son, the Port Charles detective, but by Sonny himself as well. Dex was supposed to be guarding Diane at Brando’s garage when she was attacked, where was he and what was he doing?

The only thing that doesn’t fit, which is a detail only known to those privy at GH and the PCPD, is where Dex would get a rare snake venom. But then no one knows where Dex actually lives and no one has gotten a warrant to search-perhaps he has a pet snake!