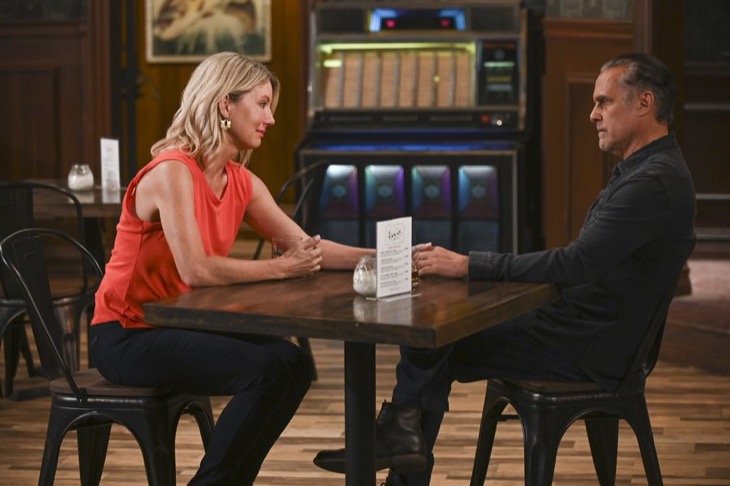 After turning down Drew Cain’s (Cameron Mathison) offer to buy Crimson because print journalism is a dying industry and magazines may not last, Nina (Cynthia Watros) decides to buy Carly’s (Laura Wright) half of the Metro Court instead. However, she does it for altruistic reasons and not to stick it to Carly. And, Carly being Carly, she doesn’t care.

Carly and Nina’s relationship has been a rough one for a while, but Carly can rarely be the bigger person or ever admit her part in things. If Carly had bothered to tell Nina that Nelle Benson (Chloe Lanier) was her daughter in the first place, Nina would have never kept Sonny’s (Maurice Benard) alive-status a secret for six months. In fact, Nina tried to tell Carly that Sonny was alive the moment she saw him, but Carly wouldn’t let her get a word in when Nina called.

So, now Carly hates Nina with the fire of a thousand suns and Nina thinks it’s time to extend an olive branch — or at least the Metro Court.

Nina Does Something Nice, Carly Balks

Carly can’t believe it when she learns that Nina of all people now owns the half of the hotel she sold just to get in on her dumbass son’s revenge plot. But when Nina offers the hotel back to Carly, the former Mrs. Corinthos turns her down flat.

“Exactly what you think Carly’s response would be, that’s what it is,” Laura Wright said in the July 19, 2022, issue of Soap Opera Digest. ” Carly is thinking, ‘I will never take a thing from you.’ She’s like ‘You’re offering this to me so that I don’t take money from Sonny.'”

Carly later has a complete meltdown with Drew Cain there to comfort her. “She is shocked,” Wright said. “She’s like, ‘Are you kidding me? This woman has my husband and my frickin’ business?’ What just happened to my life?'”

Perhaps Carly should just take Nina up on her offer, but what fun would that be? Wright does promise a whole new side of Carly, so we shall see. Stay tuned to General Hospital weekdays to see how this story plays out.