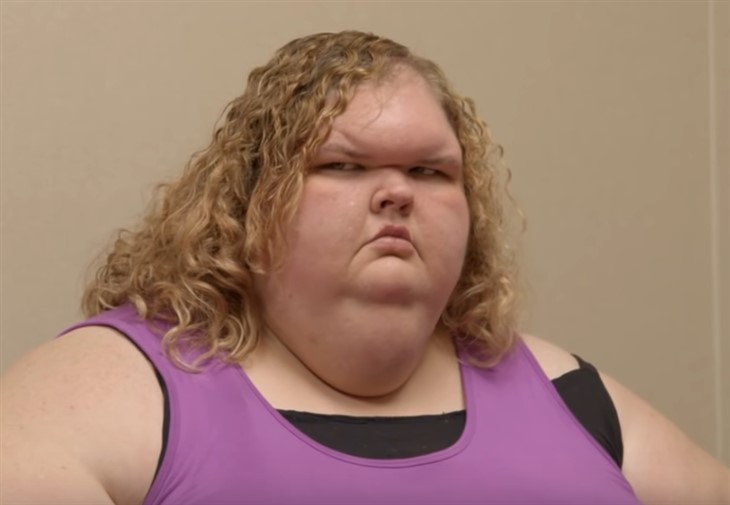 1000-Lb Sisters fans wonder about Tammy Slaton who tries to come over as mysterious. As she’s rumored to be in rehab, or even successfully underwent gastric surgery, nobody knows for certain what her status might be. After all, they often see her still attached to her trach. Well, this weekend, a photo emerged that purported to be from a photo shoot. But, is the Tammy they see actually the real Tammy today? Or is it all smoke and mirrors to con people into thinking she’s still relevant?

Tammy Slaton used to be constantly on social media. However, Amy Halterman’s sister started taking breaks from it. Sometimes, it happened because allegedly, TikTok took down her account. Mind you, quite what violates the rules there when all she does is stare at the camera, seems obscure. Perhaps she said something too risque when she talked to one of her many boyfriends there. Meanwhile, she does the same sort of thing on Instagram, so TLC fans think she trolls them with weight loss hints.

Some useful spoilers come from the 1000-Lb Sisters star. For example, she hinted very strongly that a fourth season of the show comes along. However, certain spoilers that she made in the past turned out to be inaccurate. Additionally, fans know that she probably took some heat for revealing that Amy already had her baby before Season 2 aired. Now, a photo emerged on another Instagram account that got folks scratching their heads.

The new account suggests that Amy and Tammy might run the page. However, it’s not clear that it’s actually them. Unfortunately, it doesn’t say whether it’s a fan account or not. However, the captions suggest that it is the two TLC stars. With 54 posts up and over 15K followers, a lot of people think they do post up there. Just over a month ago, a photo emerged that showed Tammy looking as large as ever while she sucked on two fruit juice bottles. Her hair looked thin and likely falling out. Additionally, she wore her oxygen tubes.

On July 5, another photo of the 1000-Lb Sisters star showed her standing up trach-free, and dressed in a pretty black top. In the caption, it said, “Cute pic from our photo shoot.”

Many TLC fans who presume it’s recent and was actually posted by Tammy, talked about her fabulous weight loss. One of them wrote, “You look fabulous Tammy 😍 😍great job.”

1000-Lb Sisters fans are not all easily taken in by Tammy Slaton’s tricks. So, a lot of them also think it’s an old photo. After all, her hair is longer than she currently wears it. Additionally, it is not the same as her newer style which is a frizzy sort of perm.

One skeptic wrote, “This is obviously from years ago she looks very young.”

Another fan who noticed the same thing questioned it, saying, “She looks younger in this photo or is this how she looks now?”

Unfortunately, those who asked if it is a recent photo never got a reply. So, whether everyone is being conned or not remains unanswered.