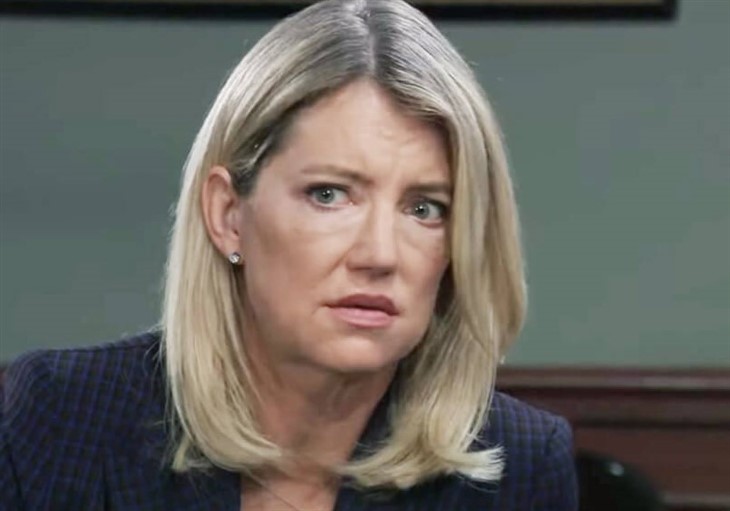 General Hospital (GH) spoilers for the next two weeks are in. From May 23 to June 3, Nina Reeves (Cynthia Watros) will learn the outcome of the visitation hearing. Rory Cabrera (Michael Blake Kruse) and Trina Robinson (Tabyana Ali) get caught. Carly Corinthos (Laura Wright) stashes evidence and more, so let’s get started.

GH spoilers for the week of May 23 reveal that Elizabeth Baldwin (Rebecca Herbst) will realize something is very wrong. It seems that instead of being convinced she’s being haunted, Elizabeth will realize she’s losing time, going into trances, and doing some weird tasks without realizing it.

Over in Brooklyn, TJ Ashford (Tajh Bellow) learns that Marshall Ashford (Robert Gossett) is on antipsychotics. TJ tells Curtis Ashford (Donnell Turner), who gets a better understanding of his father’s actions all those years ago. Speaking of Marshall, he will get a surprise visitor.

Of course, there is also the court hearing regarding Nina wanting visitation of Wiley Quartermaine-Corinthos (Viron Weaver). Scott Baldwin (Kin Shriner) calls an unlikely witness. The hearing will take a turn when Michael Corinthos (Chad Duell) takes the stand. So, we will see how everyone reacts when the judge makes a decision.

Fans can also expect the week of May 23 to feature Alexis Davis (Nancy Lee Grahn). Alexis will have a testy interaction with Gregory Chase (Gregory Harrison). The two will debate about The Invader.

Also, Chet Driscoll (Chris Van Etten) struggles with a tough decision. Chet will get advice from Terry Randolph (Cassandra James). Unknown to either of them, though, Amy Driscoll (Risa Dorken) spies on their conversation.

General Hospital Spoilers – What Else To Expect

During the week of May 30, Nina will finally learn what the judge has decided regarding Wiley. It is suggested that Nina will go MIA afterward. So, that sounds like Nina loses the case and Sonny Corinthos (Maurice Benard) might go searching for her.

Carly will finally get the DNA test results on Nina and Willow Tait (Katelyn MacMullen). Carly isn’t going to want anyone to know that Nina is actually Willow’s mother. So, she will take drastic action to keep it a secret. Plus, Nikolas and Esme will face temptation while Spencer and Ava Jerome Cassadine (Maura West) go on a search. It is teased that Ava and Spencer could find Nikolas and Esme in a compromising position.