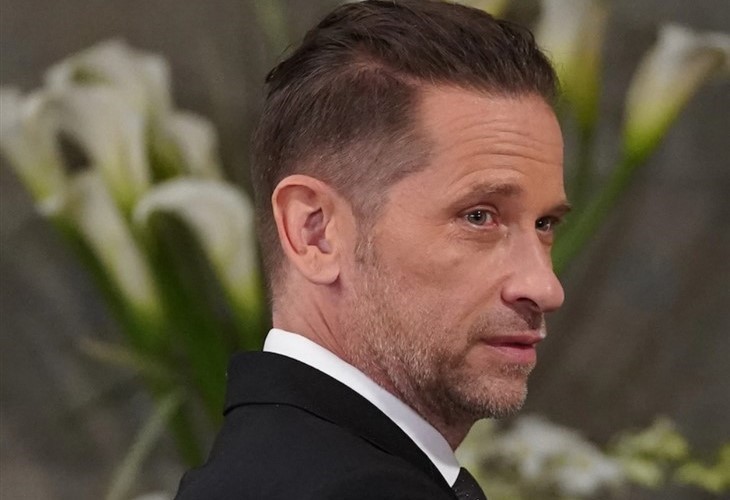 General Hospital (GH) spoilers and updates tease that Austin Gatlin-Holt (Roger Howarth) may have some scary secret connections! A recent GH episode saw someone confront him in the woods near Pautauk when he and Maxie Jones (Kirsten Storms) were camping. He told the mystery person to stay away from Maxie and her family!

General Hospital Spoilers – Some Theorize Peter August Was In The Woods, Or Even Franco Baldwin!

There are several possibilities as to who could have confronted Austin in the woods, including a not so dead Peter August (Wes Ramsey), or Jimmy Lee Holt (Steve Bond)!  While Peter is likely not an option, it’s possible Jimmy Lee could be, but why did Austin say he died then – yet another theory is Franco Baldwin (Roger Howarth)!  If Franco were alive surely he’d put Elizabeth Baldwin’s (Rebecca Herbst) fears to rest, not look for Austin in the woods; however, yet another theory suggests Franco was Austin’s twin!

No matter who Austin was talking to, it’s obvious that he has been holding onto some secrets! Will Maxie ever find another honest man after losing Nathan West (Ryan Paevey)?

If Austin really is Franco’s twin, he would have had to be adopted – and Heather Webber (Robin Mattsson) would have struck again! No one would have been surprised at Heather ditching another twin at birth although that would mean Betsy Frank (Deborah Strang) knew Heather better than she claimed! Franco and Drew Cain (Cameron Mathison) were raised as brothers for a couple of years by Betsy – surely she would have known if Franco was a twin! Perhaps Betsy knew Jimmy Lee and Charity Galtin-Holt (Gloria Carlin) too and that’s where Austin ended up-Drew wound up raised in Sawyer, NY, perhaps close to Pautauk. There would have to be a connection somewhere!

Franco once thought he was connected to the Quartermaines, specifically he thought Jason Morgan (Steve Burton) was his brother. That was explained when Drew was revealed to be Jason’s twin and they were separated at birth; Franco had a photo of Drew when he was little. It is interesting that Austin also thinks he has a connection to the Quartermaines, namely being Jimmy Lee’s son; that could be because he is Franco’s twin.

That would be a good reason for him to look like Franco, but maybe not good enough. Not a peep has been mentioned by even Elizabeth that he looks like Franco’s twin!

GH Spoilers – Who Else Could Austin Gatlin-Holt Have Been Talking To In The Woods Near Pautauk?

So, if Austin isn’t really Franco or his twin, and Jimmy Lee and Peter are really dead, who could he be talking to? There is a possibility it could be Jonah Gatlin (Scott Curtis) his stepbrother, but that is doubtful too – Jonah wouldn’t have an interest in the Quartermaines. But this situation may not be related to the Quartermaines at all; although it could be related to Maxie. This confrontation took place near where Marie Hopkins/Fake Chloe (Kimberly J. Brown) fell to her death after Maxie led her to a covered well with rotten boards she fell through. This quite possibly could be her older brother, the helicopter pilot David Hopkins (Robert Leeshock) wanting revenge for her death!