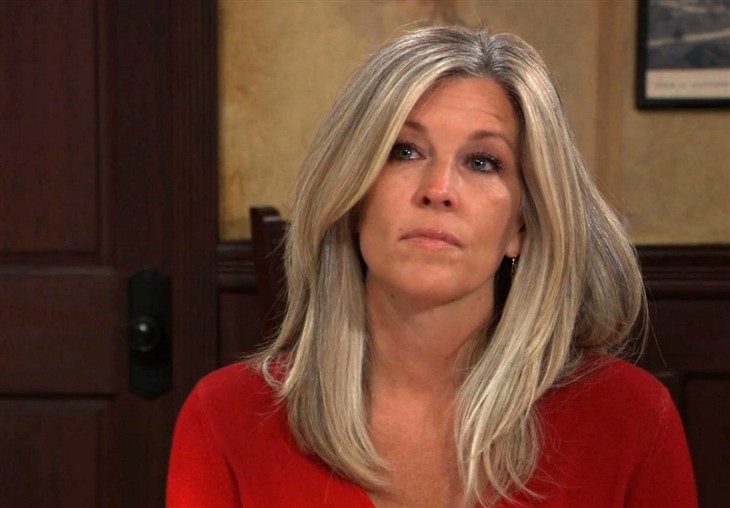 General Hospital (GH) spoilers for Monday, January 24, 2022, reveal Sonny thinking he has finally gotten through to Carly, but of course, he has not.

She lets Sonny get close for a moment but then pulls away. She just can’t accept that he actually had feelings for someone else while he had amnesia because her marrying Jason (Steve Burton) after she barely searched for Sonny’s body is perfectly acceptable. As for Sonny? He vows to never give up and that he is going to show her how much he loves her, but will he get around to that if he runs into Nina Reeves (Cynthia Watros) again?

While still on The Haunted Star, Laura (Genie Francis) wants to know what on earth Jennifer Smith is doing there. And what does he want? Longtime fans will recall that Jennifer is Frank Smith’s daughter and a woman that Luke (Tony Geary) was once engaged to marry. Frank Smith is the mobster Luke and Laura were on the run from for years when Lucky was growing up.

Over at Charlie’s, Victor Cassadine (Charles Shaughnessy) enjoys his toast to Luke, but then Valentin (James Patrick Stuart) shows up and Victor wonders if Val is sincere in his agreement to team up.
Consequences For Maxie

When Maxie Jones (Kirsten Storms) shows up at Jax’s (Ingo Rademacher) house that Brook Lynn (Amanda Setton) and Harrison Chase (Josh Swickard) now live in with her baby, Maxie is hurt. She asks to see Louise but the child who goes by Bailey cries when she is in her arms and can only be soothed by Brook Lynn. That’s the price Maxie has to pay for leaving her child with someone else for the first year of her life.

Meanwhile, Britt Westbourne and Austin Holt have drinks together once again and she needs to know what’s going on with Maxie. Stay tuned to General Hospital weekdays to see how these stories play out.

90 Day Fiance’ Spoilers: Why Fans Believe Ella Johnson Would Be A Bad Stepmother?