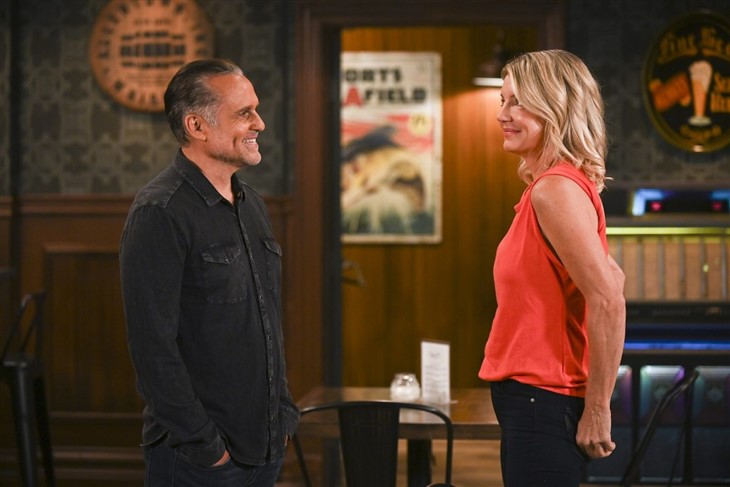 General Hospital (GH) spoilers for Monday, January 17, 2022, reveal Nina on one path and Sonny thinking he is on another. Will they collide?

Britt Westbourne (Kelly Thiebaud) goes to visit her cousin Nina Reeves (Cynthia Watros) on Monday to see if she can have any influence over Sonny Corinthos (Maurice Benard) to help Brad Cooper (Parry Shen) out. Or at least help Brad with his Aunt Selina.

However, Nina is shocked to learn from Britt that Carly (Laura Wright) moved out of Casa Corinthos, which makes Nina want to move back in — figuratively, of course. With Sonny now off his meds, that can happen sooner than later. Ava Jerome (Maura West) did tell Nina to wait, but since when does Nina listen to anything?

Meanwhile, Carly meets with Diane and discusses legal issues about her marriage. Does she want a legal separation already when Sonny didn’t really do anything wrong — yet?

Little does Carly know that she has a big ally in Drew Cain (Cameron Mathison) now. He is back at the Q house arguing with Michael (Chad Duell) because Michael is just an angry copy of his mother at this point. He is not about to forgive Sonny anytime soon. And this doesn’t seem to be about Carly. It seems to all be about Sonny making Michael look like a fool in court.

GH Spoilers – Curtis Ashford Has Some Decisions To Make

Laura Collins (Genie Francis) and Curtis Ashford (Donnell Turner) take some time to catch up and he learns that she lost Luke Spencer (Tony Geary), her second husband and someone he didn’t even ever meet, but he feels bad anyway. He apparently doesn’t feel bad enough to lament to Laura about his back-from-the-dead daddy woes. Laura asks Curtis if he is sure he wants his father back in his life even if Marshall does eventually get around to tell him the truth.

Marshall might not be as concerned with confessions as he is with Epiphany (Sonya Eddy), to who he has taken quite a shine. When he visits her at work, he once again questions her about why she never became a singer when she is so talented and encourages her to follow her dream. Stay tuned to General Hospital weekdays to see how these stories play out.

B&B Spoilers: Hope’s Mistake – Sheila Is The Enemy, Not Taylor