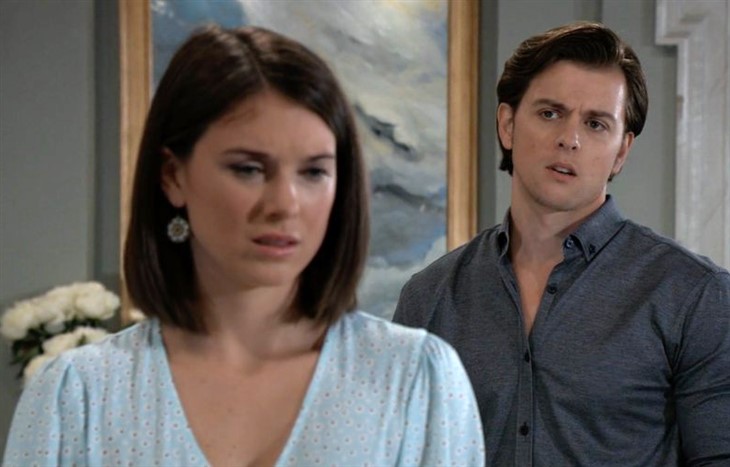 General Hospital Spoilers tease that the love between Michael Corinthos (Chad Duell) and Willow Tait (Katelyn MacMullen) has taken a few hits in recent months and it doesn’t seem as if things are going to get any easier for the couple in the near future. While the cause of their disagreement is mostly because of Nina Reeves (Cynthia Watros), all Nina has really done is show how different Michael and Willow really are.

Trouble began for this couple on General Hospital when they discovered that Nina had known for months that Sonny Corinthos (Maurice Bernard) was actually alive and living with amnesia in Nixon Falls. While Michael wanted to take legal action against Nina, Willow thought this was a bad idea. She wanted to let things be and let Nina dig a hole for herself.

But without telling Willow, Michael contacted the Pennsylvania Attorney General to have Nina arrested. While Willow was upset with this, she was more upset about the fact that Michael went behind her back.

GH Spoilers – Willow Tait Kept A Secret Of Her Own!

Later, Willow overheard Nina and Sonny discussing the fact that they had been in a romantic relationship while in Nixon Falls. Willow knew that Sonny’s wife, Carly Corinthos (Laura Wright) and Michael had no idea about this and it would devastate them so she didn’t tell Michael or Carly what she discovered. But Scott Baldwin (Kin Shriner) found out what Willow knew, and forced Willow to testify about it. Michael was upset that Willow kept this secret.

While Willow confided in Harmony (Inga Cadranel) about their recent disagreements, Michael wasn’t having it. When Harmony, who is Willow’s mother, told Michael that he should trust in Willow’s feelings, Michael told her that it wasn’t any of her business.

General Hospital spoilers show Harmony is a former cult leader and Michael still doesn’t trust her, but she has worked to become a better person. Willow will likely be furious at how Michael spoke to Harmony and this may lead to even more trouble for the couple. The once perfect relationship between Willow and Michael may very well end because of all of their recent issues.

Will Michael and Willow be able to get past their secrets? Or are the couple just now finding out that they are fundamentally different? Can they move forward or is this relationship doomed? Anything can happen in Port Charles so stay tuned to General Hospital airing weekdays on ABC. And don’t forget to check back right here regularly for all your General Hospital news, information and spoilers!