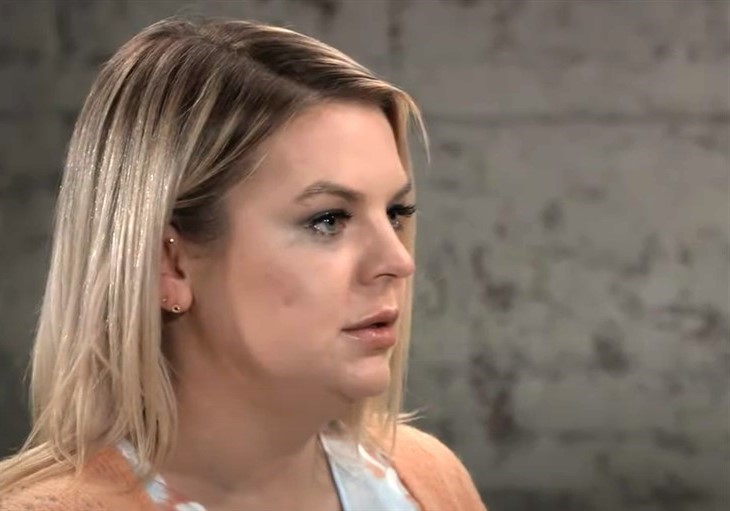 General Hospital spoilers for Monday, February 7, 2022, reveal Brook Lynn and Chase losing their minds over the fact that they allowed Peter August to get ahold of Bailey, but how will Maxie react when she learns the news?

General Hospital Spoilers – The Case Of The Missing Bailey Louise

Since nobody could seem to kill Peter (Wes Ramsey) no matter how much they tried, he now managed to escape, shoot Mac Scorpio (John J. York), injure Dante Falconeri (Dominic Zamprogna), and then break into Jax’s old house and kidnap little Weezy Faison. All in a night’s work for everyone’s least favorite cartoon villain ever.

With Brook Lynn Quartermaine (Amanda Setton) and Harrison Chase (Josh Swickard) an absolute mess over screwing up this badly, they now have to tell Maxie Jones (Kirsten Storms) what happened and nobody should envy them. Maxie is now at the hospital worried about Mac, but also slipping up about “her daughter” when talking to her mother. Will Felicia Scorpio (Kristina Wagner) catch on to what Maxie is trying to say or will she and Anna remain dumb while Maxie remains mum.

Ned Quartermaine (Wally Kurth) is worried sick over his alleged grandchild, while Austin Holt (Roger Howarth) now knows the truth and wants to help Maxie. As for Anna Devane (Finola Hughes), she is still worried sick about Valentin Cassadine but has to assure Robert Scorpio (Tristan Rogers) that Mac will be ok.

GH Spoilers – What A Night On The Haunted Star

Nina Reeves (Cynthia Watros) and Sonny Corinthos (Maurice Benard) have a long talk aboard The Haunted Star with Nina worried that Sonny is still not taking his meds. They also discuss everything that happened between them in Nixon Falls as Sonny has it in his head that Carly Corinthos (Laura Wright) has given up on him.

One thing is about to lead to another, so it’s a good thing there are staterooms on this boat. The problem is, Carly will stop by the hospital to see how Dante is and then try calling Sonny. When he doesn’t answer, she goes to The Haunted Star to tell her husband that his son has been injured. When Carly sees what she doesn’t want to see, all of Port Charles is going to need earplugs because uh-oh… Stay tuned to General Hospital weekdays to see how these stories play out.