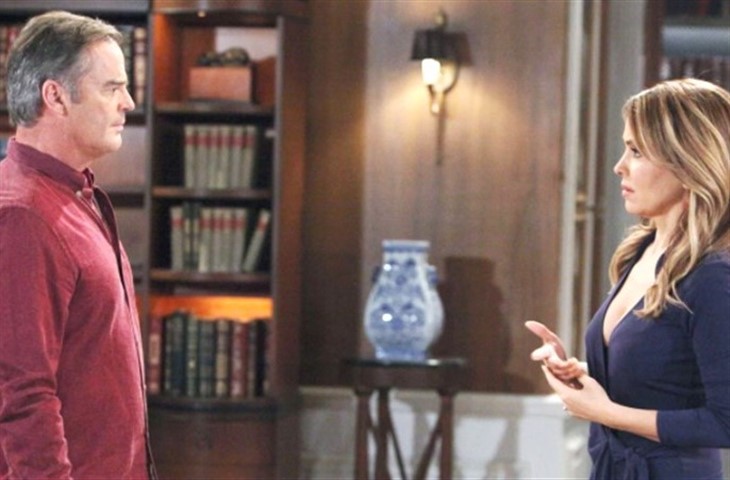 General Hospital (GH) spoilers tease that Olivia Falconeri (Lisa LoCicero) was stunned to find out the her husband, Ned Quartermaine (Wally Kurth) cheated on her with Alexis Davis (Nancy Lee Grahn). Right now, she’s still in shock but at some point soon, Olivia will have to decide whether or not she wants to fight for her marriage, or if his infidelity will lead her to file for divorce. It won’t be an easy decision for Olivia either way.

It’s completely possible that Olivia will be able to get past Ned’s cheating and eventually forgive him. He did believe at the time that Olivia was cheating on him with Robert Scorpio (Tristan Rogers). Although that was not the case, there was quite a bit of evidence to the contrary. While two wrongs don’t make a right, Olivia might be able to take that into account. In addition, General Hospital (GH) spoilers show Ned is planning to adopt Leo Falconeri (Aaron Bradshaw) since Leo’s birth father, Julian Jerome (William Devry), recently died. Olivia might not want to take another father figure away from Leo, so staying with Ned might be what’s best for her son.

Olivia is certainly not money-hungry. She didn’t marry Ned for the money or the prestige of the Quartermaine name. She married Ned because she fell in love with him. But during her time with Ned, she’s likely learned a thing or two about how the Q’s operate. If she wants to really teach Ned a lesson, she’ll have to hit him where it hurts, the pocketbook. Filing for divorce, she could take Ned to the cleaners. If she decides to take half of Ned’s assets might be the only way to hurt Ned the way he hurt her.

If Olivia and Ned do separate, she might find a new romance with Robert in her General Hospital future. It’s obvious that Robert has feelings for Olivia that go beyond friendship. Olivia seemed to enjoy her adventure at the casino with Robert and she certainly held her own even with danger all around her. Olivia and Robert could possibly leave Port Charles together, searching for adventure. That is, until Holly Sutton (Emma Samms) resurfaces.

Will Olivia forgive Ned and fight to save their marriage on General Hospital? Or will she file for divorce and take half of everything? Could Robert and Oliva get romantic? Anything can happen in Port Charles, so stay tuned to General Hospital, airing weekdays on ABC. And don’t forget to check back right here for all your General Hospital news, episode information and GH spoilers!