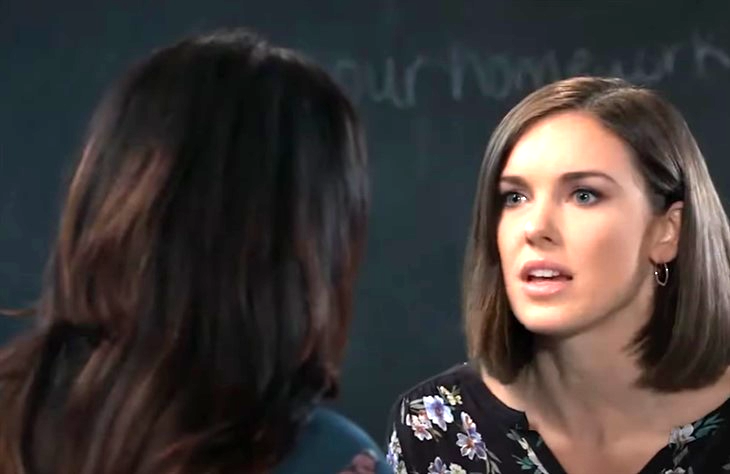 General Hospital Spoilers tease Willow Tait (Katelyn MacMullen) has every reason not to trust her mother, Harmony (Inga Cadranel). It was Harmony who brought Willow into the Dawn of Day cult. Harmony drugged Willow and gave her to cult leader Shiloh Archer (Coby Ryan McLaughlin) to have sex with. That encounter left Willow pregnant and she ran away from the cult, and even changed her name. She gave the baby up for adoption and thought that part of her life was over for good. But the past always comes back in Port Charles

But Dawn of Day came to Port Charles, and Shiloh eventually found Willow. Willow refused to give the location of her son, even though it landed her in contempt of court and in jail for a few days. Harmony, for her part, eventually turned against Shiloh and testified against him. She received a lighter sentence and was out of prison in a few months. After that Harmony showed remorse for her past actions, even though she had to work for Cyrus Renault (Jeff Kober) for a time, after he threatened to kill Willow. Harmony even served as a go-between between Cyrus and Police Commissioner Jordan Ashford (Brianna Nicole Henry), forcing Jordan to become a corrupt cop for a time.

GH Spoilers – Harmony Is Trying To Turn Her Life Around!

After she was free of Cyrus, Harmony was able to find honest work, working at Spring Ridge prison. She has even befriended Alexis Davis (Nancy Lee Grahn), who is serving time there. She has really seemed to turn her life around. She says she is sticking around Port Charles in order to be close to Willow and her adopted grandson, Wiley Corinthos (Kyler and Caleb Ends). But so far, Willow has been reluctant to let Willow back in her life!

Willow is definitely the forgiving type. And her relationship with Michael Corinthos (Chad Duell) has taught Willow that no family is perfect. And although the things that Harmony did were vile, she has turned her life around. Willow will likely soon want to reconnect with her mother. Hopefully, Harmony won’t run afoul of Ryan Chamberlain (Jon Lindstrom) before that can happen!

Is it time for Willow and Harmony to reconcile? But can Willow put everything in the past? Does Harmony deserve forgiveness? Anything can happen in Port Charles so stay tuned to General Hospital airing weekdays on ABC. And don’t forget to check back right here regularly for all your General Hospital news, information and spoilers!