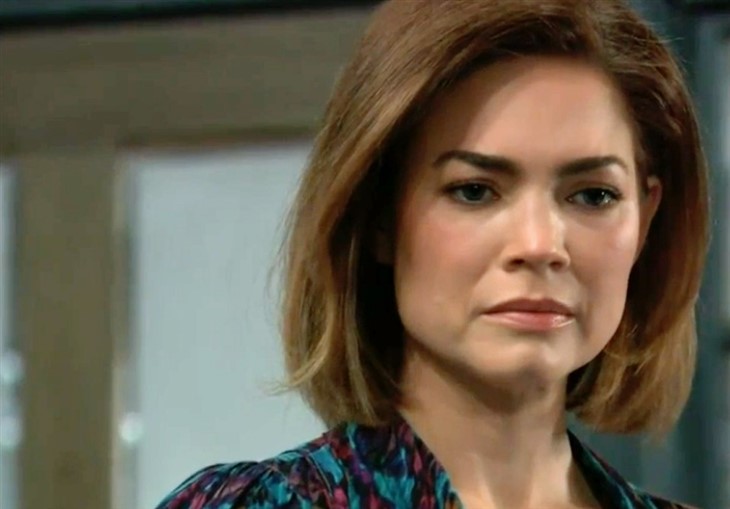 General Hospital spoilers and updates tease that Elizabeth Baldwin (Rebecca Herbst) will be upset when she gets an unexpected visitor at Shadybrook!  She was very insistent that she do her therapy without help from loved ones in a recent GH episode, and seeing Hamilton Finn (Michael Easton) could really make her furious!

Elizabeth shut Finn down quickly about visiting her in Shadybrook but it was out of protection for him as well as her niece and his daughter Violet Finn (Jophielle Love). It’s understandable that if Elizabeth is doing things in her sleep – although that still may not be the final word – she doesn’t trust that she might not hurt someone. Elizabeth wasn’t asleep, after all, when Cameron Webber (William Lipton) came home and saw her in an altered state cutting up a sweet family picture Violet had drawn.

General Hospital spoilers show Finn didn’t like the idea of her committing herself to a mental health facility, but she determined that was the only way to get answers and solutions. Elizabeth wants to get to the root of her problems, which seem to be triggered by Finn and her moving on with him.

GH Spoilers – Since Elizabeth Baldwin’s Attacks Happen At Night, Cameras Must Be On

It is best that Elizabeth is observed twenty-four hours a day, as if she were in a sleep study so doctors can see what is going on at night. As far as the memories triggering her, those need to be identified as well. They may be buried so deep in her subconscious that she cannot get to them on her own, and may need deep hypnosis or another type of therapy. Finn should know it is nothing personal towards him as a doctor but his feelings for her are getting in the way! It’s possible something in Finn’s mannerisms or speech patterns could be triggering her that remind her of a long ago trauma.

Finn does seem to have a controlling nature – not in the manner an abuser would have, but more of a need to fix things that are bothering Elizabeth. Perhaps overprotectiveness would be a better word to describe it, and she wasn’t triggered until they started interacting much more closely than just co-workers. There have been several times where his take-charge style of overprotectiveness has clashed with Elizabeth’s own sense of needing to be in control.

Finn shows up at Shadybrook Sanitarium during the week of June 6-10 while Elizabeth is in the middle of a visit with Laura Collins (Genie Francis). It’s possible that she invites him and then changes her mind but with his Mr. Fix-It attitude he may show up on his own and she won’t like it!

Elizabeth might just go ballistic on Finn with Laura there, leading to a dramatic confrontation; it’s also possible she’ll be triggered! Elizabeth will be going through extensive therapy to find out what kind of trauma she’s blocked out from her memories, and that means she’ll be all over the place. Perhaps she will react in such a way that she blurts out a name that isn’t Finn’s, and that will give her doctors a clue!  Either way, it looks like Laura will be stuck in the middle of the confrontation, and she might have to break it up!