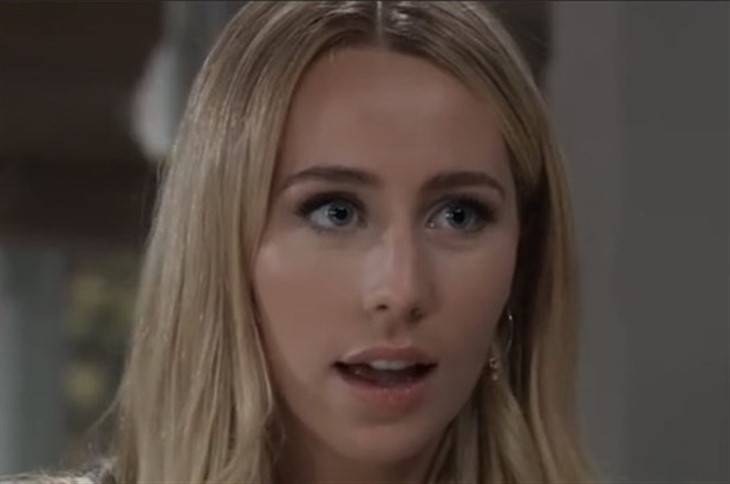 General Hospital (GH) spoilers and updates tease that Trina Robinson (Tabyana Ali) will have a big decision to make after confiding in Josslyn Jacks (Eden McCoy). Trina has something that could help her case and Joss will try to convince her to use it!

Scott Baldwin (Kin Shriner) at the last minute was replaced with Diane Miller (Carolyn Hennesy) to represent Trina in her trial; everyone believes Trina has been framed, but can’t prove it. Diane meets with Trina and her family and close friends to go over strategy, and Diane warns that the prosecutor may attack Trina’s character. Trina’s portrayer, Tabyana Ali notes in Soap Opera Digest that Trina is uncomfortable and saddened by Diane’s warning, considering those close to her have been trying to encourage her.

Diane is a fantastic lawyer and Team Trina is positive that if anyone can get Trina exonerated it’s Diane. After all, this is the woman who has gotten mobster Sonny Corinthos (Maurice Benard) off on many charges he should have done time for, surely she can help Trina!

Ava Cassadine (Maura West) who is at the courtroom along with Trina’s family and close friends urges her to use her alibi she mentioned to Ava earlier. Trina has been hesitant to use her having seen Spencer Cassadine (Nicholas Chavez) in the cemetery as an alibi; she doesn’t want to get him in trouble. Spencer was a few days shy of fulfilling his term at Spring Ridge when Trina saw him at the same time the revenge porn was uploaded to the Internet.  But, there may be no other choice than to rat out Spencer if she is going to retain her freedom; it may be her only ace in the hole! But then there’s having to have Spencer called to the stand to testify that he saw here there at that time also – a one sided alibi never works!

Then Trina confides her Spencer sighting to Josslyn, who of course pushes her to go for it, insisting it may be her only get out of jail free card! Josslyn may be right, considering no one has found anything else that could even cause reasonable doubt of her guilt in the minds of the jury. Officer Rory Cabrera, (Michael Blake Kruse) Curtis Ashford (Donnell Turner) and Marcus Taggart (Réal Andrews) are looking for the Highsiders bartender who recognized Esmé Prince (Avery Kristen Pohl).

But so far the bartender has not been found, and the alibi of Spencer putting flowers on his mother’s grave is all she has. Josslyn and Ava both continue to strongly encourage her to use it!

Unless a last minute miracle happens to pop up and a witness surfaces to say they saw Esmé uploading the video, Spencer is all Trina’s got. There is a very slight possibility someone saw Esmé plant the phone in Trina’s purse, but that happened in a very crowded hallway at PCU. Everyone’s mind was on the racy video that had just circulated throughout the school so someone looking like a pickpocket would not have been noticed. Trina must make a big decision to choose protecting Spencer or possibly retaining her freedom, and she needs to make it quickly!

The Bold And The Beautiful Spoilers: Finn Woke Up To Danger, Must Find A Way To Escape!

The Bold And The Beautiful Spoilers: Baker Clueless, Ridge And Brooke Solve Sheila Case For Police?