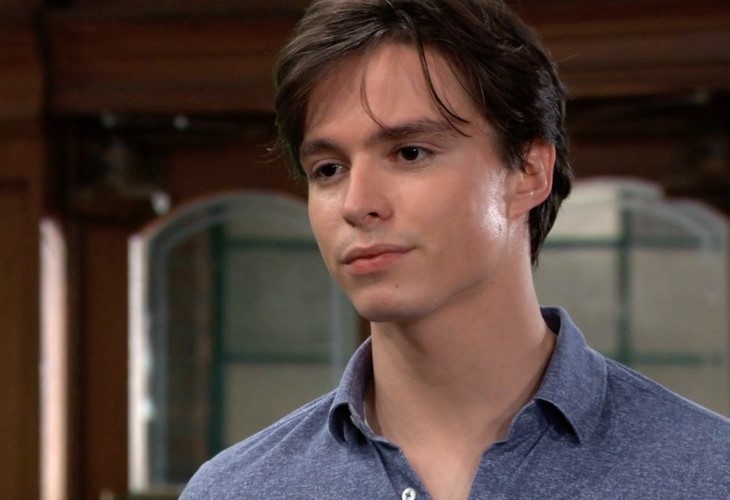 It seems Spencer’s efforts to find evidence that Esme framed Trina are going nowhere fast, and her trial is much too quickly approaching; he wasn’t able to find anything concrete. He found a letter from her nanny and a bottle of pills he knows are opioids, but unable to prove she used them to drug Trina. Sam McCall (Kelly Monaco) is trying to track down the nanny, Maggie Fitzgerald (uncast character) but so far has been unsuccessful.

In addition to trying to get Uncle Victor’s help to expose Esme and get the evidence needed to exonerate her, he needs to ask him about a particular thing. It was Victor who got Spencer the lighter sentence in the safer place, only having to do a short time in Spring Ridge. It was also Victor who arranged the “field trip” for Spencer to his mother’s grave shortly before he was to be released.  He wants to know if he were to testify that he saw Trina at the cemetery when she was supposed to have uploaded the video if he’d lose his parole. Victor would have to check on that – but he wants to know more about his great nephew’s interest in Trina’s case and why he suspects Esme.

It’s not like there’s any love lost between Victor and Esme – Victor knows that the girl’s presence in Wyndemere Castle has been a major point of contention. Ava Cassadine (Maura West) frequently confides in the elder Cassadine about troubles between herself and Nikolas Cassadine (Marcus Coloma), and Victor is quite fond of Ava! Victor did rescue Esme when Sonny Corinthos (Maurice Benard) “kidnapped” her, but that was because Nikolas was upset, and Esme thought she was pregnant.

It would seem that Victor cared more about the Cassadine heir that Esme may have been carrying than he does Esme herself.  The time he barged in on Esme and Spencer making out on the couch at the Collins house, he treated her like the maid!

Victor agrees that there’s something fishy about this girl when Spencer tells him about the pills and the letter that disagreed with what Esme had told him about her life. Of particular interest to Victor is Esme’s fascination with serial killer Ryan Chamberlain (Jon Lindstrom) who Victor knew of as a DVX assassin from his time in the WSB! Victor explains that it was a closely kept secret that Ryan survived, and his and Kevin Collins’ (Jon Lindstrom) father, spy Victor Collins (Nicholas Pryor) knew. Victor agrees to use his contacts to find out more about Esme’s identity and also to find evidence she framed Trina; Victor, like Ava, fears Esme’s after the Cassadine money!

Counting On: Will Jim Bob Duggar Sue Katie From Without A Crystal Ball?