The Bold And The Beautiful Spoilers: Finn Woke Up To Danger, Must Find A Way To Escape! 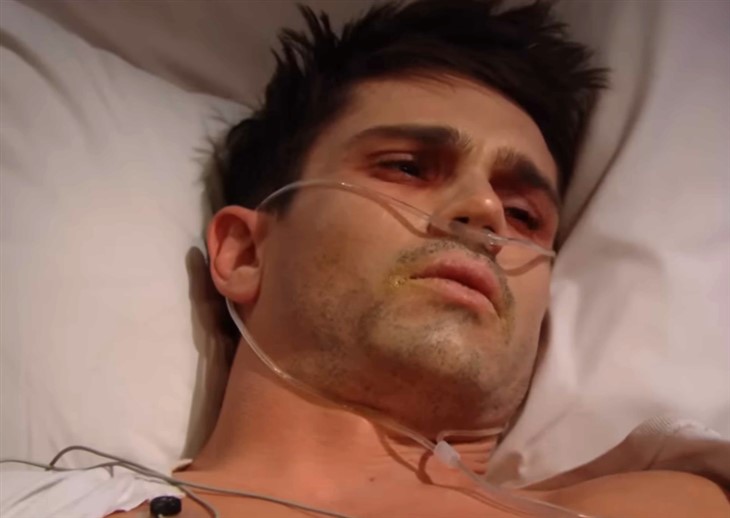 The Bold and The Beautiful spoilers and updates tease that John “Finn” Finnegan (Tanner Novlan) woke up to danger! Now he must find a way to escape in upcoming DOOL episodes!

Finn woke up to Sheila Carter’s (Kimberlin Brown) face when he came out of his coma, once she had shocked him back to life against Mike Guthrie’s (Ken Hanes) advice. He had previously started to come to just a little bit with eyes fluttering and blurry vision and comprehension a few days earlier when Li Finnegan (Naomi Matsuda) was also there. She and Sheila talked about themselves to him as his “two mothers” but he wasn’t able to respond other than a slight finger wiggle.

Of course, after that Li made the mistake of making a phone call where Sheila could hear her; Sheila assumed betrayal and police. She chased after Li, and Li went off into the bay with an explosion; Finn began to fear after Sheila didn’t answer where Li was when he asked!

At some point Finn notes that Sheila has an accomplice, a guy, but has no clue as to who he is; Mike is in casual clothes, not his uniform. At first Mike refused to help Sheila with her son because he didn’t want to be an accomplice, but he changes his mind after the flat lining incident. Mike likely figures Finn will soon die anyway or be brain damaged from Sheila’s shocking him with the defibrillator against his advice. But Finn is far more awake and coherent than he pretends to be – because he can tell his birth mother is unhinged and dangerous! He fears that Sheila did something to Li, and pretends to be unconscious when she talks to Mike, eventually realizing Mike may be sympathetic to him and not Sheila!

Finn knows by his own symptoms and his own doctor’s training that he needs to be in a hospital, but Sheila won’t take him, telling him it is complicated! She gets very nervous when he keeps insisting he be taken to a hospital, although she does assure him he will see his wife and his son. In Soap Opera Digest, portrayer Tanner Novlan notes that Finn’s main goal is to escape, realizing his birth mother is deranged and very dangerous!

Finn tries to get through to Sheila in a delicate manner, to not upset her but he soon becomes frustrated and tries to figure out her endgame. If she truly loves him and wants the best for him like she claims, she should know he needs care beyond her expertise and equipment .

Naturally, Finn was upset when Sheila revealed to him that even Steffy Forrester-Finnegan (Jacqueline Macinnes Wood) thinks he’s dead, and soon Sheila produces his death certificate to prove it! Previous BOLD episodes revealed that it was Li who signed off on his death, although that is likely either not the original she signed. Sheila probably procured it with Mike’s help and either forged a new one or obliterated Li’s name; seeing his beloved adopted mother signed off on his death wouldn’t help. Finn realizes at once how madness and an ability to be methodical co-exist in Sheila, and he handles her very delicately so as not to set off her paranoia. He takes it that the death certificate was all her doing and she will go to any length to get what she wants, namely him!