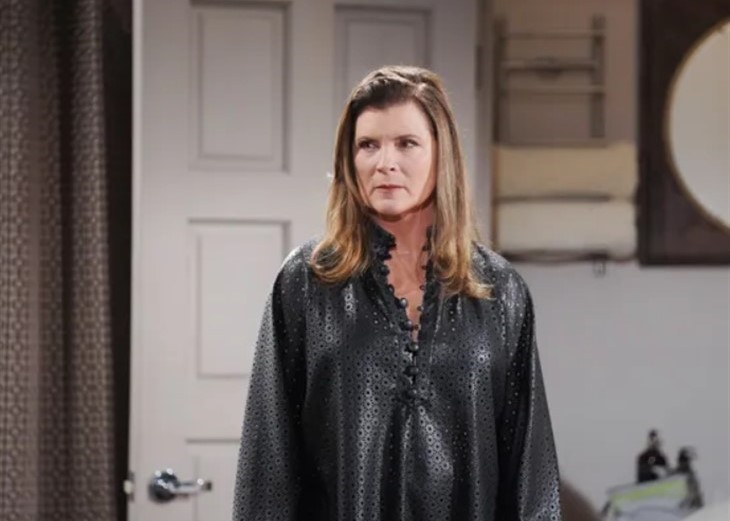 The Bold and the Beautiful (B&B) spoilers document that Deacon Sharpe (Sean Kanan) should only be concerned with one lady, his daughter, Hope Spencer (Annika Noelle). But B&B fans know he is dealing with two ladies who put him at risk.

Deacon is working with his ex-wife, Nikki Newman (Melody Thomas Scott), to provide her with old information about Diane Jenkins (Susan Walters). Nikki told Deacon that he had nothing to worry about as long as he was straight with her. Whether he is divulging all he knows is hard to tell.

The other woman in his life is not referred to as a lady by anyone. Sheila Carter (Kimberlin Brown) has become Deacon’s most unlikely significant other, especially because he thought she was dead.

Nikki crossed over from The Young and the Restless under the pretense she will meet with Eric Forrester (John McCook). The cover story involves Nikki securing a wedding dress for the vow renewal ceremony that her granddaughter, Summer Newman Abbott (Allison Lanier), is having with Kyle Abbott (Michael Mealor).

Deacon is a part of Nikki’s past that she put in a closet and locked. But desperate times for soapy measures.

So, she told Phyllis Summers (Michelle Stafford), who Sheila was falsely believed to have morphed into through radical plastic surgery more than a decade ago, that a trip to Los Angeles, California could be worthwhile.

Deacon’s tell about a rich man he saw Diane with when she was in LA may prove useful for Nikki, which would leave Kanan’s character in the clear.

Sheila could care less about Steffy Forrester Finnegan (Jacqueline MacInnes Wood). Brown’s character has demonstrated minimal remorse for attempting to shoot her and hitting John Finn Finnegan (Tanner Novlan) accidentally or for taking a second shot that stuck Steffy down and nearly killed her.

Sheila convinced the authorities that she was consumed by a wild animal. But, as is her pattern, Sheila was not eaten by a bear in the woods, though the creativity of that tale was good.

Her arrival at Il Giardino was fitting, considering the many dramatic elements that have taken place in that setting during Sheila’s latest B&B return. Having already visited the cliff house in disguise, entering and holding Hayes Forrester Finnegan (Iliana and Vienna Norris), Sheila sees that as a step toward a reunion with her Finnegan family.

While she may not shoot him, Deacon can not possibly survive living with Sheila. His fugitive will be discovered, or she will pursue reckless scenarios that push Deacon back to prison.

Deacon appears to be playing the doomed man role in a film noir-like arc that stars Sheila. The end of her story is not yet in sight.

Halloween is approaching. Maybe this witch will finally meet justice on B&B, but hardcore daytime fans would likely not bet on it.