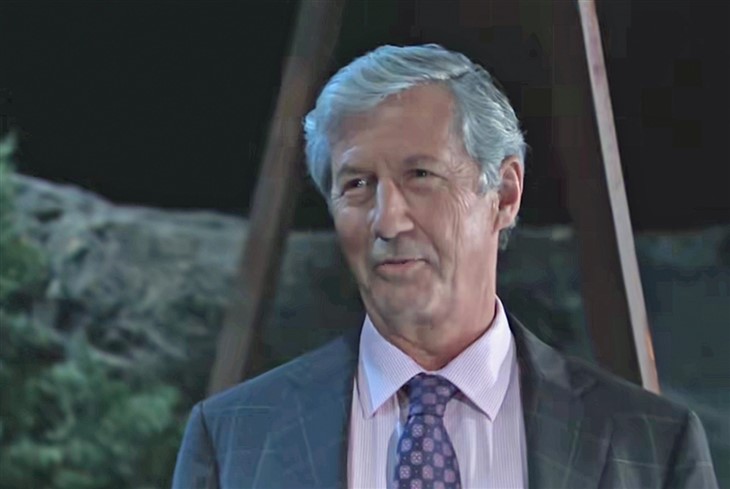 General Hospital (GH) spoilers reveals Victor Cassadine (Charles Shaugnessy) has just abruptly invited himself to move into Wyndemere, and Nikolas Cassadine (Marcus Coloma) is out of excuses to give him for why it’s a bad idea. Victor just won’t take no for an answer. When Elizabeth Baldwin (Rebecca Herbst) entered the room as Victor was telling Nikolas of his decision to move in, she was taken aback that Nikolas was allowing it to happen. The two had words after Victor left the room and Elizabeth warned Nikolas it was a very bad idea to move his uncle in while he’s holding a loud and angry pregnant woman hostage in the north tower. How is Nik going to keep this a secret now?

When Elizabeth walked into the room, Victor instantly made an assumption about her presence at Wyndemere. In Victor’s world, men and women are never just friends. Instantly, he’s going to presume Elizabeth might be the reason Nikolas didn’t want him to move in just yet. Has he been using Wyndemere as his bachelor pad while he licks his wounds over divorcing Ava Jerome Cassadine (Maura West)? Victor will continue to pretend he believes Nikolas when he claims he and Elizabeth are just friends, but he doesn’t.

Eventually, Nikolas is going to realize it benefits him more if Victor thinks there is something going on with Elizabeth than if he keeps insisting there isn’t. An affair with Elizabeth is the perfect scapegoat to keep Victor distracted from the real reason Nikolas doesn’t want him around cramping his style. As Nikolas starts to encourage Victor to suspect the worst of him and Liz, will he even take Liz’s relationship with Hamilton Finn (Michael Easton) into account if Finn gets wind of Victor’s theory?

Victor did promise Nikolas he wouldn’t tell a soul about Elizabeth being at Wyndemere, and he might mean it right now. However, as Elizabeth continues to show up — each time disappearing into another area of the castle while she’s tending to Esme Prince (Avery Kristen Pohl), Nikolas is going to have to find a way to cover for her. Will he start slinking away with her just to give the impression they’re together, and what will that imply to Victor, who thinks they’re having an affair? Nikolas should know better by now that Victor is only an ally while it suits him, and he’ll be reminded when his uncle threatens that Ava might find out about Elizabeth’s trips to Spoon Island if Nikolas doesn’t speed up the divorce process. How is Nikolas going to find his way out of this mess? Stay tuned for more GH news and spoilers to find out!

Days Of Our Lives Spoilers: E.J. And Nicole Find Themselves In Bed Together