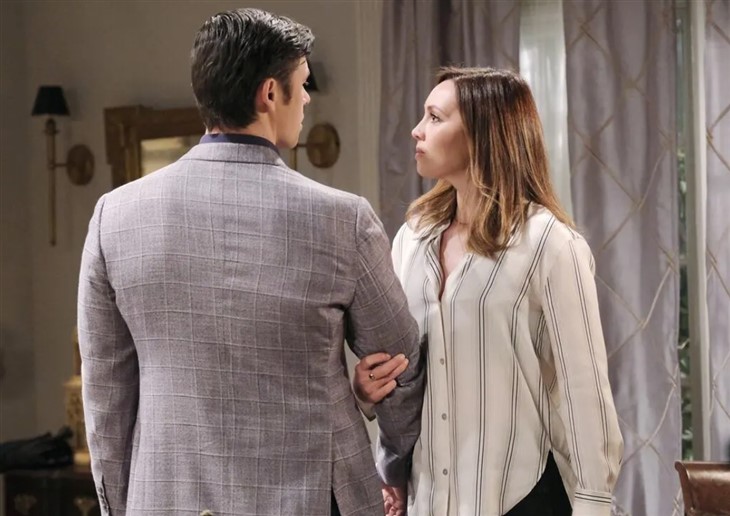 DOOL spoilers reveal that Gwen is extremely insecure, especially about her relationship with Xander. This is how Kristen DiMera (Stacy Haiduk) was able to convince Gwen to break her out of jail. Now that Xander has spoken to Rex Brady (Kyle Lowder), Gwen is even more worried that their relationship is coming to an end.

Gwen could have stood a chance of keeping Xander despite Sarah’s potential return. All she had to do was tell Xander the truth about Kristen kidnapping Sarah. Instead, she let Kristen and Ava Vitali (Tamara Braun) strong-arm her into a risky escape plan. When Xander finds out the truth, he will be furious with Gwen. There is a possibility that Xander could have forgiven Gwen, but only if Sarah’s life weren’t in danger.

Days Of Our Lives Spoilers – Freaking Out at Abigail DiMera

Abigail gets the idea that Kristen might have impersonated Sarah so nobody would notice her disappearance. Once Gwen realizes that Abigail and Xander are working together, her insecurity turns to rage. Gwen attacks Abigail and accuses her of trying to break up her relationship. Of course, that’s not Abigail’s reason for finding Sarah, but nobody will be able to reason with Gwen.

Head writer Ron Carlivati told Soap Opera Digest that Xander proposes to Gwen. However, is this a sincere marriage proposal? Or is he just trying to reassure and neutralize Gwen? Will he still want to marry Gwen once he finds Sarah? What if Sarah still loves him? These are all questions Xander needs to ask himself before breaking someone’s heart. After all, fans know what Gwen does when she’s been hurt and that could put Sarah at risk.

Do you think Xander truly wants to marry Gwen or is he just trying to get her to calm down? Will Xander and Abigail find Sarah? If so, will “Xarah” reunite, or is that chapter over?