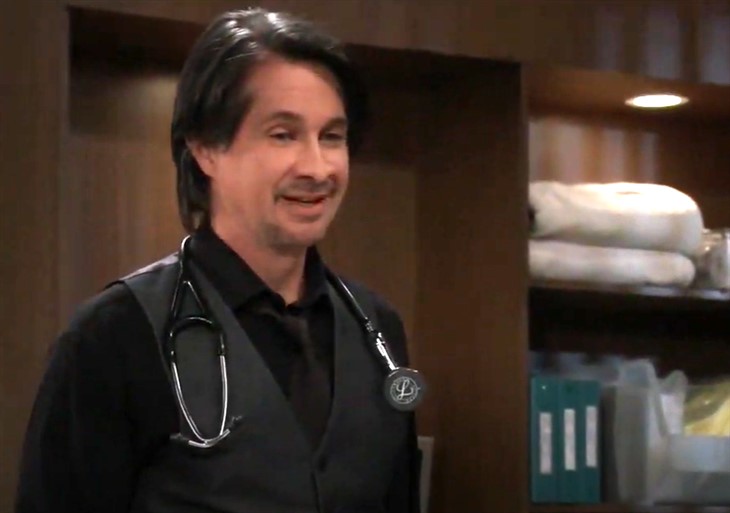 General Hospital (GH) spoilers and rumors tease that Dr. Hamilton Finn (Michael Easton) might be drafted to find a cure for Peter August’s (Wes Ramsey) poisoning, but fail to on purpose in upcoming episodes of General Hospital!

General Hospital viewers know that General Hospital, and any hospital with a poison control center will have a database of known poisons, symptoms, and antidotes to save patients who have been poisoned. Sometimes children swallow things they shouldn’t, or adults get food poisoning or even are victims slowly poisoned by substances such as arsenic, which build up slowly and symptoms mimic other illnesses.

But these types of poisons are common enough to be found in the hospital’s databases. But it’s entirely possible that Peter may have been poisoned with an unknown, unique poison – just like Finn’s brother Detective Harrison Chase (Josh Swickard) was by Peter himself! Finn, ironically, may be the only doctor at General Hospital who can develop an antidote for the poison Peter was given in his breakfast by Brad Cooper (Parry Shen) at the direction of his aunt, Selina Wu (Lydia Lock). This will put Finn in quite the awkward position!

General Hospital viewers can imagine that since Ms. Wu was behind the poisoning, it could be an obscure herbal substance such as Olivia Jerome (Tonja Walker) used on Griffin Munro (Matt Cohen) and learned about during her years hiding out in China. She had become an expert herbalist in Chinese herbalism. The more obscure the poison, the more difficult it would be to detect, and possibly the more difficult to find an antidote for.

General Hospital viewers know that if poison is the weapon of choice, the more obscure it is the deadlier it will be, because the antidote may be herbal as well and difficult to find and compound – the victim could die by the time an antidote is sourced and compounded! Finn may be tasked with something as difficult to identify as the toxin used on Chase, and even Peter himself won’t know where to start – that is, if he’s even conscious. He very well may be comatose by the time he reaches General Hospital from Pentonville! Anna Devane (Finola Hughes) will get the call that Peter’s been poisoned, and although it may be awkward and difficult, she may be forced to request Finn’s expert diagnostic services to identify and find an antidote, so Peter can be punished alive, not dead!

General Hospital viewers know that physicians are tasked to obey their Hippocratic oaths, and to do no harm. But Finn isn’t the one who did the harm to Peter this time – unlike when he threw him down the stairs in anger over Peter’s throwing the last dose of antidote off the roof of General Hospital when Chase was dying! Finn will undoubtedly be tempted to let Peter die from the poison he’s ingested, and not try very hard to identify it or try to compound an antidote for it!

Finn’s got his own reasons for feeling the world is better off without Peter August, and his close friend Elizabeth Baldwin (Rebecca Herbst) is one of them – he has been her shoulder as she faces the difficulty of her son Jake Webber’s (Hudson West) death first of his stepfather Franco Baldwin (Roger Howarth) and now his birth father Jason Morgan (Steve Burton) because of Peter! Finn will be torn, thinking Peter’s life is not worth saving – he won’t pull him off life support if he’s on it, but he may not try very hard to identify the poison or develop an antidote for it – the world is safer with Peter in a possibly indefinite coma!