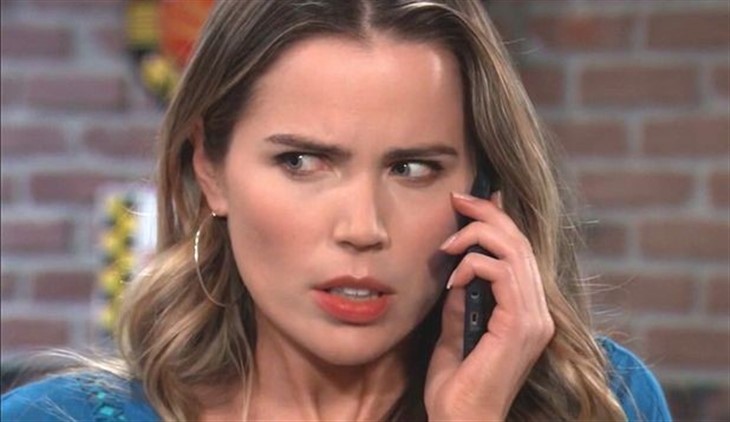 Still dealing with the shock of her husband Brando Corbin’s (Johnny Wactor) untimely death, Sasha has a realization; what happens to her guardianship? Brando had just been appointed guardian over Sasha, which means he would have to make all her financial and healthcare decisions in exchange for her not doing prison time. What happens to that now that he’s dead; does that mean Sasha has to go to prison for her meltdown at smarmy reporter Grant Smoltz (David Lautman)?

Smoltz and another woman she thought was her friend had set Sasha up to admit that she was doing drugs, for Smoltz’s story. She lost it and destroyed his car with a valet parking time and would have gone after him next if Brando hadn’t arrived just in time.

In Dr. Hamilton Finn’s (Michael Easton) office, Elizabeth proudly gives him a status report but Finn is nervous when she says she remembers the woman at the bottom of the stairs. Viewers will remember he had claimed his late wife Reiko Finn (uncast character) had died of Blackwood’s Syndrome, which he also suffered from and later found a cure for. Elizabeth drew the woman from her memories and Finn had looked at old photos on his phone, one which was of himself, Reiko and another person.

Elizabeth stands to blow Finn’s whole story about Reiko’s death to pieces, and it’s a good chance the man at the top of those stairs was him, not her father. Apparently he didn’t remember Elizabeth as a teenager, or could there be another explanation; maybe Reiko had a twin?

On board the Haunted Star, where Victor Cassadine (Charles Shaughnessy) has taken Lucy Coe (Lynn Herring) in a grand romantic gesture, he needs a promise. He also has plans for something big and wants her to partner with him in it, after his family failed to work with him on it.  Victor tells Lucy that she must always be honest with her when it comes to their relationship, presumably a business one.

However, Victor appears to be mixing a whole lot of business with pleasure, after gifting Lucy with an expensive diamond bracelet. Lucy hopes she can get Victor into her confidence so she can expose his secrets to Anna Devane (Finola Hughes) and Valentin Cassadine (James Patrick Stuart).

Elsewhere, Nikolas Cassadine (Marcus Coloma) seeks his aunt Alexis Davis’ (Nancy Lee Grahn) advice, and asks if that’s the best she can do for him. He may be asking advice about his relationships, either with his son Spencer Cassadine (Nicholas Alexander Chavez) or his estranged wife Ava Cassadine (Maura West). Both of them are very stubborn and have both been hurt very badly. Nikolas has a hard row to hoe ahead of him trying to make amends with either one of them. Nikolas could also be asking some legal advice about helping Spencer in Pentonville as well.

At GH, Nina Reeves (Cynthia Watros) is visiting Ava, where she is still recovering from her injuries after being attacked by the Port Charles Hook. Nina appears to be giving Ava some romantic advice as Ava asks her if she’s pushing her to get back with Nikolas. However, she could also be thinking Ava will be safer at Wyndemere even though Sonny Corinthos (Maurice Benard) has her guarded twenty-four seven.

Ava is the only victim that hasn’t died, and that seems to be why the Port Charles Hook added venom to the end of the hook when he or she attacks. Nina is probably worried the attacker will come back to finish the job and could take out Frank (Frank Lyon) as well.

General Hospital Spoilers – A Talk With A Friend

Sonny appears to be sitting at a restaurant booth as he’s having a heart to heart talk with his former attorney and good friend Diane Miller (Carolyn Hennesy). He is emotional as he asks her how can he ever forget that night, likely talking about the night Brando was murdered. Sonny is worried about his family and friends and putting out a lot of protection for them, and determined to find the monster himself.

Sonny was there at Charlie’s Pub the night Brando was attacked, having just had lunch with him, Sasha and Gladys Corbin (Bonnie Burroughs). His daughter Kristina Corinthos-Davis (Lexi Ainsworth) saw the attack in progress, a horrible sight.

On board the Haunted Star, trying to save Lucy from Victor, Anna and Valentin are in danger as Johann Bauer (Max Decker) approaches with a gun. Anna barely stopped Valentin from sneezing but Victor’s henchman heard them anyway. Valentin will have to improvise, and chances are he will pull Anna into a stateroom and they’ll get romantic themselves. That way if Johann notifies Victor, maybe he’ll just think that father and son’s great minds are thinking alike.