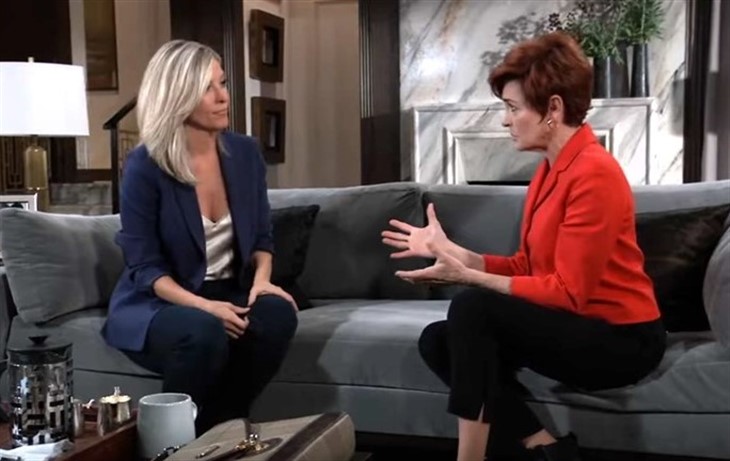 General Hospital (GH) spoilers tease that as Nina Reeves (Cynthia Watros) has been given extreme liberties to visit Wiley Corinthos (Eric and Theodore Olson) as a result of Jasper “Jax” Jacks’ (Ingo Rademacher) blackmailing Michael Corinthos (Chad Duell) that his mother, Carly Corinthos (Laura Wright) will fight back in an upcoming episode of General Hospital! She will turn to Corinthos family attorney Diane Miller (Carolyn Hennesy) for advice about a restraining order against Nina to keep her away from Wiley!

General Hospital Spoilers – An Overreach? Yes, But It Won’t Surprise Anyone

General Hospital viewers will not be at all surprised that Carly would think she could override her son and Wiley’s adoptive mother, Willow Tait Chase’s (Katelyn MacMullen) wishes concerning Nina visiting Wiley. Yes, it is an extreme overreach considering that Michael is a grown man and Carly is no relation to Willow at all! Plus, now there is another player in the game – Willow married Detective Harrison Chase (Josh Swickard) in a deathbed marriage and there’s a good chance that he would be cured by now thanks to Dr. Hamilton Finn’s (Michael Easton) hail Mary at the last minute.

General Hospital viewers will recall that Finn realized that Cyrus Renault (Jeff Kober) had manipulated the results of the paternity test, so he retried his trojan horse cure with Gregory Finn’s (Gregory Harrison) and Jackie Templeton’s (Kim Delaney) DNA instead and Chase lived. This has made not only Michael and Willow’s lives very complicated, but Wiley’s as well, and Carly’s attempts to manipulate Nina’s visits with Wiley.

One thing Carly might likely do is reveal that Nina’s daughter was Nelle Benson (Chloe Lanier) because he may not already have been told this. Carly would hope to enlist Chase in denying Nina’s visits, but he will likely attempt to set her straight! Chase would remind her that linking Nina to Nelle to deny visitation with Wiley makes about as much sense as linking Nelle to Wiley to decide he’s a demon child! Carly will have to take another avenue!

General Hospital viewers will recall that there was a similar attempt to keep Nelle from Wiley by proving her an unfit mother, but that didn’t fly with the judge over the family court that time. That was when Michael and Willow married the first time, forced into breakups with Sasha Gilmore (Sofia Mattsson) and Chase by their pretending to be having an affair.

According to General Hospital spoilers and recaps, Michael and Willow got custody of Wiley, and Nelle kidnapped him and fled to a family vacation cabin owned by the Corinthos family. That night Michael rescued Wiley and Nelle fell off a cliff to her death, losing her half of the half-heart necklace in the clearing where she and Carly had struggled. That, of course led to Avery Jerome-Corinthos (Ava and Grace Scarola) finding it when Ava and Nikolas Cassadine (Maura West, Marcus Coloma) were allowed to use it for a short family vacation.

General Hospital viewers will recall that this in turn led to Nina’s eventual discovery of Nelle having been her birth daughter. Carly tries the same thing she did with Nelle, bringing up Nina’s many past stunts, especially pointing out that she induced Ava’s labor and kidnapped Avery as a newborn.

But Diane may point out that has been years, and Nina has shown no reason to believe she would kidnap Wiley. She would have certainly had chances to do so before, and has not. Diane also says that when a child’s parents, even though living separately, have custody of the child that the grandmothers have no legal standing regarding restraining orders, let along fighting for custody.

Does Carly really want to prove her own son an unfit father and Willow an unfit mother just to have legal standing over Wiley in a court of law? Diane didn’t think so!

The Bold And The Beautiful Spoilers Next 2 Weeks: A Water Birth, A Marriage Collapse And A Hostage Situation